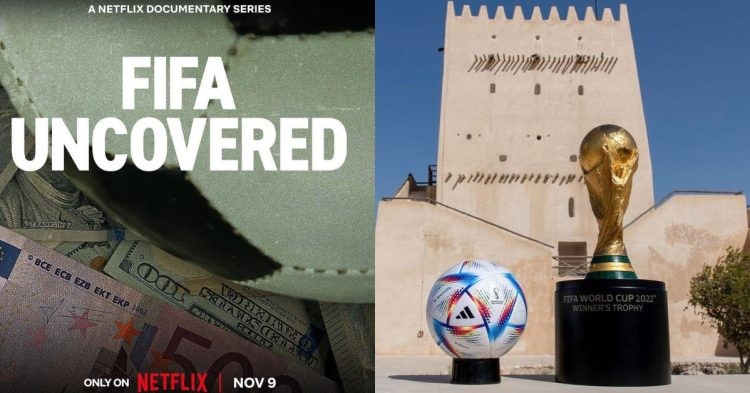 With just a few weeks left until the start of the greatest football event in the world, the fans are pretty excited for the event. The FIFA World Cup 2022 will be played in Qatar next month.

This is the first time in history that a middle-eastern country will host the FIFA World Cup. The preparations are going on well after Qatar officially won the bid for this year’s FIFA World Cup.

But before the competition unfolds, we have a huge drama series coming up about the FIFA World Cup. The Netflix special “FIFA Uncovered” will be released just 11 days prior to the World Cup.

After Qatar won the bid for the World Cup, it came as a shock and has proved to be one of the most controversial moments.

There have been several allegations of horrendous bribery and corruption by the official board members of “FIFA.”

The Netflix documentary series will cover all these allegations and will be presented in a unique manner just days before the Qatar World Cup.

The documentary series will go on air and will be available on Netflix from November 9th. Just 10 days prior to the first match of the campaign between Qatar and Ecuador.

FIFA Uncovered – What to expect from the documentary series?

Featuring the official board members of the governing body “FIFA” as the protagonists, there is much to look for.

We might get to know the scandals of former FIFA President Sepp Blatter. He was one of the abysmal characters on the board who tried to spoil the charisma of the sport.

The "FIFA Uncovered" docuseries was announced on 77 DN, and it is released exactly 389 weeks after the FIFA officials were arrested.

Meanwhile, Sepp Blatter was not alone in this tarnished history. Former UEFA President Michael Platini was also one of the talismanic figures in the corruption of the board.

Sepp Blatter and Michael Platini, both at one point in time, were the most powerful figures in this sport. They were also pressed with charges legally, which were denied by both of them.

In short, the documentary drama series will go from political turmoil to global politics, as well as the power struggles of various figures in the official board.

“FIFA Uncovered” will look to unravel all this tarnished culture and will describe the biggest scandals of all time. It will also cover the bid won by Qatar for the World Cup, which has been alleged to be the “biggest scandal of all time.”

Many fans didn’t know about the scandals and corruption until now. But those who knew, who had little idea of the scandals, have come up with a strong voice on social media.

The fans have shown their rage and hatred towards the corrupted board members of FIFA.

A fan commented, “The tip of a much darker iceberg. But a beginning. Massive respect for Netflix for bringing this out now.”

Netflix are releasing a documentary exploring corruption in FIFA.

It will air on November 9th. This will be explosive.pic.twitter.com/KprpFVU4vb

A second said, “Imagine if someone hacked the screen at the Qatar World Cup opening ceremony and put this trailer on. It would be one of the best moments in football history.”

A third added, “The last World Cup took place in Russia and the upcoming World Cup will take place in Qatar. This tells you everything you need to know about FIFA.“

The last one concluded, “Netflix with impeccable timing as always. It’s a good thing they are so big right now. FIFA can’t touch them.“

With just weeks left until the Qatar World Cup 2022, it has already turned out to be one of the biggest sporting events in the world. However, many iconic stars will feature for the last time in this World Cup and will wish to win it.

Things have become spicier and more interesting for the fans with the documentary series being released just days before the opening match of the campaign.