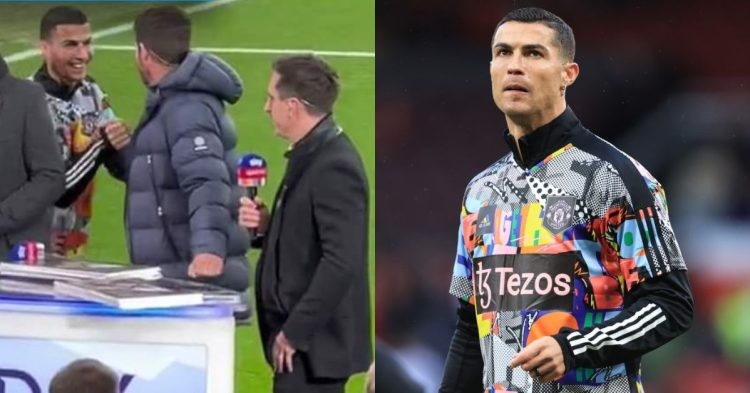 Cristiano Ronaldo recently started for Manchester United in the game against West Ham. They currently sit in 5th in the EPL table with a game in hand. Ronaldo managed to get back on the lineup on the night after quite some time. Marcus Rashford’s goal was the difference between the two sides as he scored his 100th goal for United through a bullet header in the 38th minute.

The game was quite scrappy where David de Gea had to pull out some magical saves to keep Man Utd in the game. However, Ronaldo’s actions even before the game caught the attention of the entire soccer world. He attracted the spotlight on him once again after ignoring former teammate and friend Gary Neville. As Ronaldo was walking onto the field, he met former Man Utd striker Louis Saha.

Welcome to the, blanked by Ronaldo club @GNev2
😂😂

As he greeted and hugged Saha, Neville was in the background with a few others. Many believe that he was waiting for a conversation with Ronaldo and perhaps a handshake too. However, it seemed like the former Real Madrid star had something else on his mind as he walked straight onto the field for the warm-up after that. Jamie Carragher even took to Twitter to tag Gary Neville and welcomed him to the, “Blanked by Ronaldo club.”

Ronaldo can’t take constructive criticism even when he deserves it. Man child.

The interaction before the game caught the attention of fans on Twitter as well. Many had a go at the star striker for not greeting Neville. A fan wrote, “Ronaldo can’t take constructive criticism even when he deserves it. Man child.”

For the fans that do not know, Neville is currently a pundit and a soccer broadcaster. Recently, he criticized Ronaldo for his performance when playing for Manchester United.

Imagine being so insecure you ignore everyone who criticises you , pathetic behaviour

Deserved it neville, Ronny needs to realise these former players/pundits opinions don’t matter they sold out to the mainstream media.

The former Man Utd right-back’s comments send a message to Ronaldo, where he mentions that the Portuguese star isn’t good enough anymore. He publicly announced that United are better without him. However, fans believe that Ronaldo shouldn’t have snubbed Neville for just merely criticizing him and doing his job, while others mention that Neville should be ignored.

Gary Neville for years avoided criticizing Ole but jumpted on the Ronaldo hate bandwagon when it became popular, he deserves to be blanked

Another Twitter user mentioned, “Gary Neville for years avoided criticizing Ole but jumpted on the Ronaldo hate bandwagon when it became popular, he deserves to be blanked.” For context, Gary Neville was one of the very few people publicly supporting former manager Ole Gunnar Solskjær, even when the club was going through rough patches. This earned him a few haters among fans.

Good. Neville is a disgrace of a pundit. Roy Keane is clear

Another fan claimed that Neville was a disgrace of a pundit and that Roy Keane is a better pundit. There has been no comment from Ronaldo regarding why he ignored his former teammate. However, it is still unknown whether he didn’t notice Neville there or he ignored him on purpose. Regardless, Man Utd fans were to quick to turn on their star forward and called him out for not being able to take criticism.