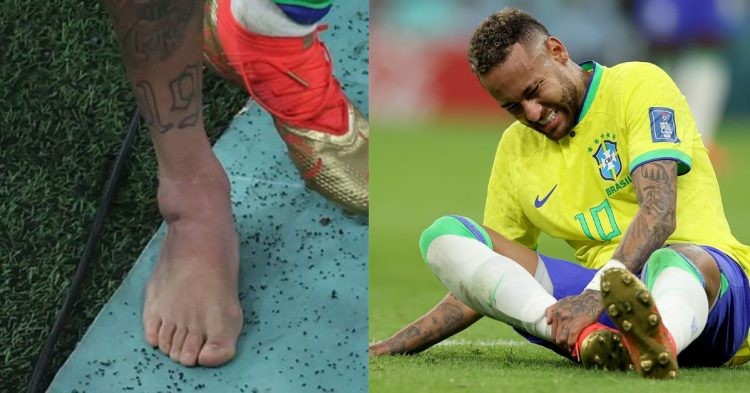 Neymar's injured ankle (left) Neymar goes down after being fouled during the Brazil-Serbia clash in the 2022 FIFA World Cup (right) (Source: Twitter)

Brazilian superstar Neymar’s world cup hopes have taken a drastic turn after he was injured during their opening match against Serbia. Neymar came off the pitch in the 80th minute after sustaining an injury to his right ankle. The Selecao-forward was fouled nine times during the match, the most fouls against any player in this world cup. He has damaged some ligaments in his right ankle and is also nursing a bone trauma in the same foot.

Neymar posted an emotional update about his injury on Instagram. While some fans have empathized with the Paris Saint-Germain forward, few fans have turned against him. Few fans have started mocking Neymar and accusing him of faking an injury.
Here’s a look at a series of Twitter threads of fans posting memes and mocking the former Barcelona winger.

Played with worse on a Sunday morning. Strap it up, pain killers will be sound

Neymar is undergoing treatment for his ankle after getting injured during Brazil’s 2-0 win over Serbia in the 2022 FIFA World Cup.

Is Neymar out of the World Cup?

The Brazilian medical team has ruled out Neymar for the rest of the group-stage matches against Switzerland and Cameroon. However, he will try to make a comeback during the knockout stages if things go well for Brazil.

The 30-year-old posted an emotional message on Instagram. He said, “I’m injured, yes, and it’s a pain, and it will hurt. But I’m sure that I’ll have the chance to return because I’ll do anything possible to help my country, my teammates, and myself.”

Brazil coach Tite has also confirmed that fullback Danilo has also suffered a sprained ankle and is currently out of the team. Other players like Anthony, Lucas Paqueta, and goalkeeper Allison have also missed some training sessions.  The Brazilian fans would be desperately waiting for Neymar’s return to keep their hopes of winning the world cup alive.