“No, What Do You Mean? It’s Mine” – Lionel Messi Gets Frustrated as TV Presenter Attempts to Discredit His Goal 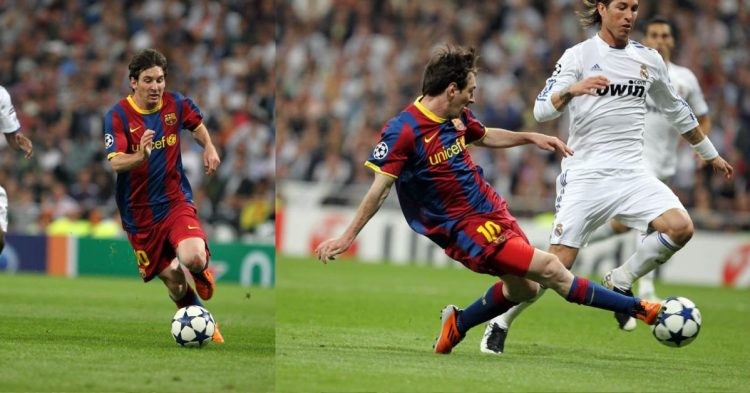 In a viral video of Lionel Messi, he is asked about some of the famous goals he has scored during his immensely successful career. One of which was a fantastic solo run and goal against Real Madrid in the UEFA Champions League 2010/11 season. Messi revealed that the ball hit Sergio Ramos before going in.

Reacting to the goal, Messi said, “I think the ball hit [Sergio] Ramos in the end. I was a bit lucky” To this, the presenter replied, “So, it’s an own goal?” In an instant, Messi replied, “No, what do you mean? It’s mine.” He claimed full ownership of the fantastic goal.

Messi reacting to his goals 😂 pic.twitter.com/xwokcJVWLC

The 2019 video which was shown on Fox Sports in Argentina made Messi recall some of the great goals he has scored in a Barcelona shirt. The first goal he was shown was one he scored against Arsenal in March 2011. After a brilliant through ball by Iniesta, Messi chipped the ball over the keeper and volleyed it home. They won that match 3-1 and won the tie 4-3 on aggregate.

The next goal was the one against Real Madrid. The Argentine forward began his run from midway inside the Real half and skipped past a host of players including Lassana Diarra, Raul Albiol, and Marcelo. He then slotted it past Iker Casillas. Barcelona progressed into the final and beat Manchester United 3-1 that season to win the UCL.

Messi was all praise for Ramos when the presenter said how tough a player the Spaniard is. Messi said, “Yeah, the truth is he is a great player.” He then agreed to Ramos being called a very tough player.

Lionel Messi does not remember his goal against Sevilla

The Argentine seemed to have forgotten a goal he scored against Sevilla in March 2012. Messi nutmegged a defender and then chipped the onrushing keeper to score one of the best goals of that season. However, Messi admitted to not really remembering it completely.

The presenter asked, “This is one of the best goals. Would you say it’s in the top 10 of your career?” Messi was lost for words for a few moments, then laughed and said, “I don’t remember.” The presenter joked that he has too many goals to choose from and Messi said that he remembers the goals when he sees them.

When asked if he remembered this goal, Messi replied, “Yes, when the move started. I did. But I don’t remember them by memory.” The Argentine is only human. He scored 91 goals in that calendar year of 2012, so, probably a few are not etched properly in the memory.