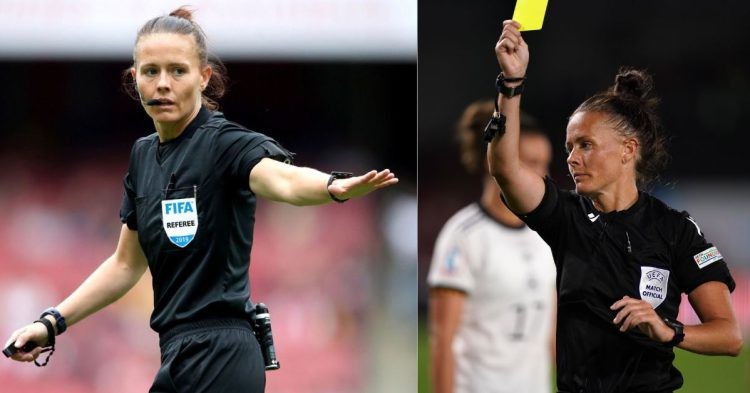 Rebecca Welch scripted history as she became the first woman to referee a Men’s English Soccer League match in 2021. Rebecca officiated the League Two match between Harrogate Town and Port Vale. League two is the third and the lowest division of the English Football League (EFL) system. However, as she gears up to officiate a Championship match, fans have already cautioned her.

Saturday’s @EmiratesFACup match was the first men’s third round tie to be officiated by a woman.

Rebecca Welch, you are a trailblazer. pic.twitter.com/3gUqjkdf1g

Recently, Rebecca has been appointed to referee the Championship game between Birmingham and Preston this Saturday. However, Rebecca is not the first woman to officiate a men’s Championship soccer game. This plaudit goes to Amy Fern, who back in 2010, officiated the match between Coventry and Nottingham Forest for the final twenty minutes of the game. Amy was brought on as a replacement for the appointed referee, Tony Bates, who had suffered a calf injury.

Rebecca started her refereeing career in 2010, after previously working as an administrator in the National Health Service (NHS). However, the 39-year-old English referee continued to work in NHS till 2019, when she left her job to become a full-time referee. Rebecca has previously officiated in several men’s Nation League matches. She was also the referee during the final of the 2017 and 2020 FA Women’s Community Shield. Welch has also officiated in the Women’s Champions League.

In 2020, she was added to UEFA’s elite women’s list of referees, where she joined Stephanie Frappart, who had officiated a match during the FIFA World Cup 2022. Stephanie, the 38-year-old French referee, was in charge of the group-stage game between Germany and Costa Rica.

Although Rebecca has earned a good reputation as a referee, fans have not held back from cautioning Rebecca ahead of her latest game. Rebecca is all set to officiate in today’s men’s Championship game between Birmingham and Preston. Although Rebecca has previously officiated men’s soccer games, fans think that a men’s Championship game is a different ball game altogether.

Football history’s being made later… Rebecca Welch will become the first woman to referee a Championship fixture when she takes charge of Preston’s game in Birmingham 🙋‍♀️ #CapitalReports pic.twitter.com/5xvcXmDo2W

While most fans have wished Rebecca good luck before today’s match, some still have their doubts. A few fans commented on Instagram, saying, “Not an easy profession so good luck.” Another commented, “She can’t be any worse than the useless blind men refs we have.” However, a lot of people have congratulated Rebecca and also appreciated the Championship’s initiative of having more female referees.

Fans wished Rebecca by saying, “Well done on your achievement and good luck,” and, “Record-setter and trailblazer. Many congratulations to Rebecca Welch and all the very best of luck in the upcoming future. ” One fan even appreciated Rebecca’s refereeing during a League One match of Charlton.