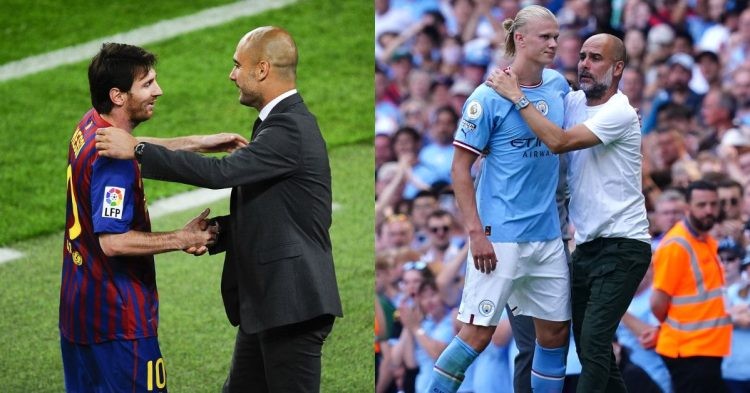 Over the years, there have been many players who fans have claimed were the “Next Messi” or the “Next Cristiano Ronaldo”. However, the two players have remained consistent throughout the last two decades and have proven that there are no other players like them.

Similarly, Messi‘s former manager Pep Guardiola thinks so too. In an interview, he spoke about Messi and compared him to his best player right now, Erling Haaland.

Pep Guardiola believes no one comes close to Lionel Messi

During the interview, Pep was asked if Haaland was the most complete striker he had coached to date. The Spanish coach replied, “And Messi? Absolutely the numbers are incredible and unbelievable. There’s no doubt about his [Haaland] quality. He’s not the best but he’s one of the best for sure.”

Haaland is currently in the form of his life. Before his arrival, many claimed that the English Premier League would be too tough for him. However, he has shocked all his critics with his jaw-dropping performances on the pitch. According to Transfermarkt, the Norwegian striker has scored 22 goals and assisted 3 times in just 16 games across all competitions.

Given the way he has portrayed himself during the games, Haaland has caused many soccer fans across the world to wonder whether he is the next great after Messi and Ronaldo. Despite the claims, Pep doesn’t seem to think that way. He believes that Messi is the most complete player and that Haaland is only one of the best.

The Argentinian forward had enjoyed the most successful spell of his career with Pep at Barcelona. In just 219 games, Messi scored 211 goals, and assisted 94 goals. Together with that, Guardiola led the iconic Barca team to two Champions League triumphs, both of which came against Manchester United in 2009 and 2011.

Messi’s legacy might be too far for Haaland to touch but if we’re being honest, the latter is a completely different player. He’s more of a goal-poacher than Messi, who plays the role of a playmaker as well as a center-forward. This explains why Haaland will be in a league of his own and the only one of his kind, like Messi.