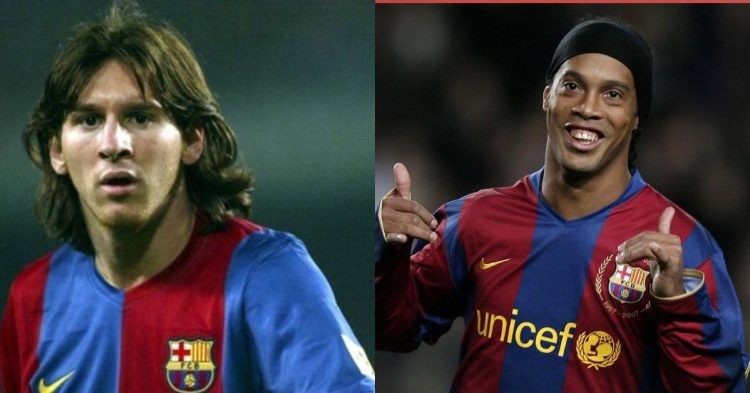 Soccer is a sport that requires tons of talent, spending multiple hours in training, daily, to get better at what you do but more than these two qualities, a soccer player must have a sharp mindset and not let any distractions take you away from your goal.

Over the years, many players who have had an abundance of talent haven’t reached their true potential even if they have done well in their career, and at the top of this list stands Brazillian Maestro, Ronaldinho.

Ronaldinho was an absolute magician on a pitch and was a walking work of art when he used to play but it is widely believed that he could have achieved much more if not for his alcohol problem and the other distractions of partying and drugs.

He won the Ballon d’Or award in 2005 at the age of 25 and it was believed he was going to be a superstar for FC Barcelona in the coming years. But in a shocking turn of events Barca’s new manager, Pep Guardiola chose to sell one of the ‘World’s Best Player’ Ronaldinho to AC Milan, and not only him, he even sold Deco to Chelsea.

Guardiola sold Ronaldinho because of his problematic off-field character

According to former FC Barcelona and Arsenal player, Alexander Helb, the reason for Pep Guardiola to sell both Ronaldinho and Deco was their massive unprofessionalism and Pep didn’t want young Messi to be influenced by their distractions.

Messi was coming of age at this period and Pep didn’t deem it fit for him to have distracted characters like Ronaldinho and Deco around him.

Is Ronaldinho in jail?

Ronaldinho’s character issues haven’t been a secret for the fans as the former World Cup winner was also recently arrested by Paraguayan authorities for attempting to enter the South American country with an adulterated passport.

The former Ballon d’Or winner was subsequently released after 5 months but his friends have had apprehension of his drinking problem increasing further after his mother’s death in 2021. We can only imagine what else Ronaldinho could have done on the pitch if not for these issues, he would have been an absolute world-beater if he had the mindset of someone like Cristiano Ronaldo.

Lionel Messi joined La Masia, FC Barcelona’s famed academy in 2000 after he impressed the Barcelona executives so much so that they signed his contract on a napkin there and then. Barcelona even agreed to pay for the treatment of the 13-year-old Messi who was suffering from a Growth hormone deficiency. He rose through the ranks and made his debut for Frank Rijkaard’s first team in 2004.

Throwback to #Messi‘s first official goal for Barcelona…with a delightful assist from #Ronaldinho. From one legendary No 10 to another.

Messi was an instant hit at the Catalan club and his talent was recognized by fellow players as well as fans. He scored his first goal in May 2005 after a delightful pass played by none other than FC Barcelona’s then no. 10, Ronaldinho.

The Argentine and the Brazillian soon formed a brilliant partnership but the new manager, Pep Guardiola, sold Ronaldinho to protect Messi in 2008 but not before the Brazillian had passed the baton to his young teammate. Messi saw his peak under Pep and won every trophy possible including a famous ‘Sextuple’ in 2009.