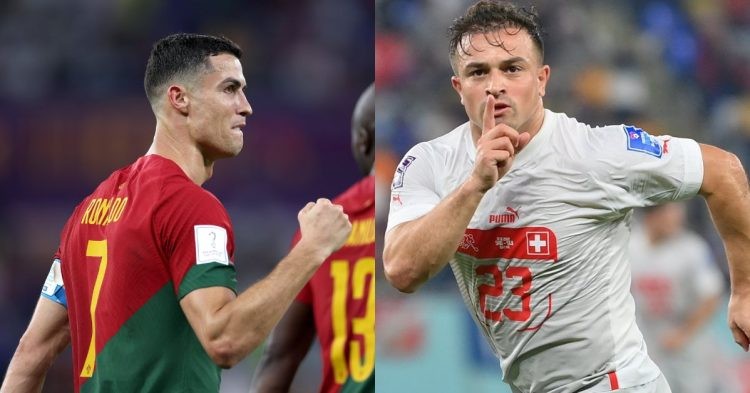 The FIFA World Cup 2022 has had a few underdog stories now. It would be an exaggeration to call Switzerland an underdog, especially since they have done extremely well on the biggest soccer stage in the world. They were in Group G with Brazil, Cameroon, and Serbia. Although both Cameroon and Serbia performed decently, Brazil and Switzerland won 2 games each to qualify for the knockout stages. They will be playing against Portugal next.

Cristiano Ronaldo-led Portugal started the tournament well too. They got off to a good start against Ghana with a 3-2 win. Right after that, the A Seleção got the job done against Uruguay after winning the game 2-0, thanks to a brace from Manchester United star Bruno Fernandes. Portugal will have to be on their A game against Switzerland, which is a team that knows how to defend together as a unit.

How to watch Portugal vs Switzerland in the US?

Fox Sports are one of the official broadcasters of this year’s World Cup. They are also the main broadcasters that will telecast the game in English. Apart from that, soccer fans can also enjoy the game with Spanish commentary on Telemundo and Universo Now.

If you wish to enjoy the game using TV-streaming options, then FuboTV, SlingTV, and YouTube TV might be your best options to do so.

What time will Portugal vs Switzerland start?

Portugal has done well to qualify for the knockout stages this year, and so has Switzerland, but who will take the win? It would be quite safe for us to assume that the game could be equally poised. Both countries have talented players who can be a threat in the opposition box.

The biggest issue for Portugal would be their midfield. Bruno has been exceptional in terms of goals and assists at this World Cup, but there have been times when he hasn’t been present in the midfield area. In addition to that, Portugal does not have a traditional defensive midfielder in the center of the park to help the defense. William Carvalho is getting the job right now but will he be a good option for Fernando Santos?

On the other hand, Switzerland has players who can work well with each other as well. They did well to hold their ground against a star-studded Brazil in the group stages. Breel Embolo has been one of the country’s best players so far, after scoring 2 goals so far.

According to FIFA‘s men’s soccer rankings, Switzerland is the 15th-best team in the world. Their opponents, Portugal, sit in 9th place. The Swiss team will be looking to climb up the standings with a good finish at the World Cup this year. For that to happen, they would have to overcome Cristiano Ronaldo-led Portugal first.

Despite having some good players, we could claim that Portugal can take the win in this one. Bruno and Ronaldo could be key for their nation, along with Bernardo Silva, Ruben Dias, and Rafael Leao. Ronaldo and Co. could walk away with a 2-1 victory, with their pacey attack proving to be too much for Manuel Akanji and Fabian Schar.

Will Cristiano Ronaldo play against Switzerland?

All eyes will be on Cristiano Ronaldo as he hasn’t scored in the last 2 games for Portugal. If there’s one thing we know about the Portuguese star, it’s that he knows how to bounce back from setbacks. He hasn’t been able to find the back of the net at this tournament. Moreover, he hasn’t been able to perform better than Lionel Messi too. An interesting fact is that Messi isn’t the only player to have an edge over Ronaldo.

At his age, injury scares are common. But Ronaldo has done well to keep himself in top shape at the World Cup this year. Fortunately for Ronaldo fans, the former United star hasn’t suffered an injury so far. And he has been training to start for Portugal against Switzerland as well. Considering the fact that he hasn’t scored in a couple of games now, we might witness another Ronaldo masterclass on the pitch against Switzerland.