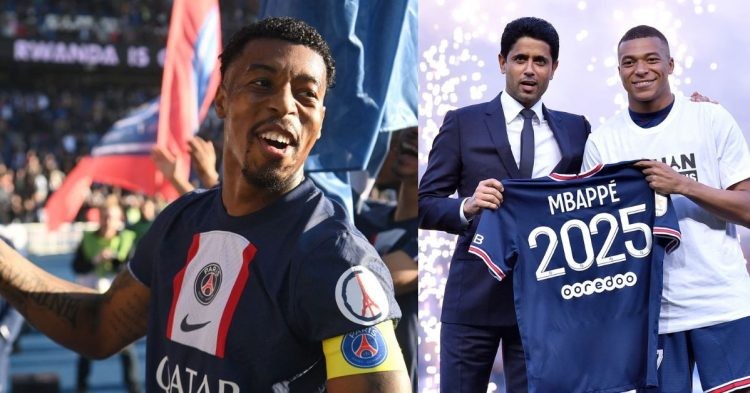 Presnel Kimpembe announces on Instagram that he was unaware about PSG's decision to make Kylian Mbappe vice-captain. (Credits: Twitter)

Paris Saint-Germain defender Presnel Kimpembe has shown his surprise at Kylian Mbappe being selected as the vice-captain of the club. Kimpembe has uploaded a story on Instagram saying he was not made aware of the situation but will respect the club’s decision.

His story stated, “Over the past few hours, I have been able to hear and read a lot about myself. Therefore, I wish to make things clear to avoid spreading false information about me. I was not made aware of this decision, this is completely false… That said, I will always respect the decisions of the club.”

🚨🚨💣 Presnel Kimpembe says on Instagram that he was NOT made aware of the decision of PSG to make Kylian Mbappé vice-captain at his expense but he will always respect the decision of the club! 🇫🇷❌🤔😳 pic.twitter.com/IP6XGsXbNr

It seems impossible to see a season go by without any drama in Paris. The latest again involves their favorite child Mbappe. He has been chosen as vice-captain by manager Christoph Galtier. However, it seems like Galtier did not discuss his decision with the team. He announced it during a press conference and at least Kimpembe was made aware of the decision from there only.

27-year-old Kimpembe is a fan favorite as he is a PSG academy product. The defender is going through a tough time now with an injury. He has been able to play only eight games for the Parisians in the league this season and was also ruled out of the 2022 FIFA World Cup through injury.

Kimpembe, whose contract with PSG is set to expire this summer, remains in talks with the Parisians over a potential contract extension. The French defender, however, also has his eyes set on a spell abroad before he hangs his boots, according to L’Équipe.

The Ligue 1 champions’ defensive outlook might change quite a bit going into the upcoming season. Former Real Madrid defender Sergio Ramos’ deal expires at the end of the current campaign along with Kimpembe’s.

It is being reported that Inter Milan defender Milan Škriniar is set to join the Paris club. He has given his agreement to join PSG on a free transfer in the summer of 2023. The Slovakian soccer player has turned down various extension offers from the Nerazzurri. There are not many days left in the winter window but it could still happen that Škriniar’s move is pushed forward to this winter.

PSG football advisor Luís Campos has no intention of letting Kimpembe go easily. However, a move abroad for the French defender is not out of the question. He had rumors linking him to Chelsea this past summer. Also, with new developments between him, the club, and Mbappe becoming vice-captain, Kimpembe might make the move away from toxicity.