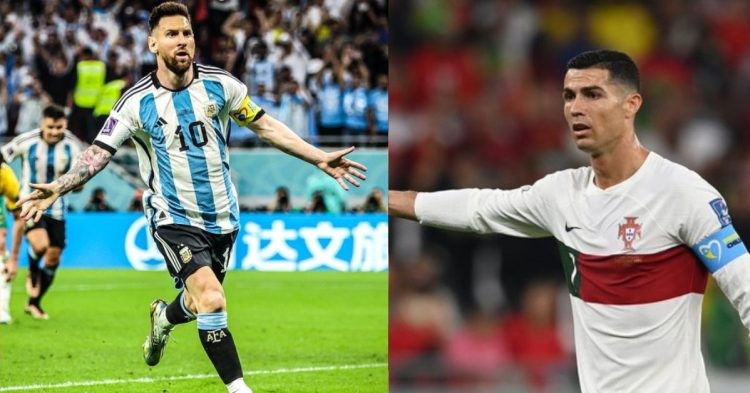 After Argentina‘s impressive recovery to top their group and defeat Australia in the Round of 16, Lionel Messi pulls ahead of Cristiano Ronaldo as he scored the opening goal in Argentina’s 2-1 win over Australia.

This leaves Cristiano Ronaldo, who is not having the kindest run of form, to open his account in the World Cup’s knockout stages.

The five-time Ballon d’Or winner became the first man to score in five different editions of the FIFA World Cup after he netted from the spot in Portugal‘s opening game against Ghana.

This proves to be just another feather in the cap of an already impressive and massively illustrious career that the Portuguese talisman has had.

It’s crazy to imagine that two of the best soccer players of this generation had no goals to show for in the knockout stages, going into this year’s World Cup.

Lionel Messi has 785 senior club goals for club and country and even reached the World Cup final back in 2014, yet he failed to produce a goal in the knockout stages of the competition.

The dry spell of the seven-time Ballon d’Or winner, however, has been broken. He pulls ahead of his Portuguese counterpart. He achieved this by curling the ball characteristically into the bottom corner, past Matt Ryan.

Now it is up to Ronaldo to produce something special in Portugal V Switzerland.

Will Cristiano Ronaldo play against Switzerland, and can he score?

Cristiano Ronaldo has faced a lot of flak from fans online of late. This is mainly attributed to the Portuguese’s dip in form this season.

Ronaldo did not have a proper pre-season with his previous employer Manchester United. Thereafter, he struggled to get into Erik Ten Hag’s starting XI. Since then, he has showcased poor goalscoring form.

However, the man who reached 800 career goals this season will have to score to equal Messi’s record.

Portugal is the favorite going into the game against Switzerland. The latter are still expected to put up quite a resistance against Portugal’s star-studded attack. Portugal’s attack is expected to be spearheaded by their talisman and captain, CR7.

Even though Ronaldo is not in the best of forms, his manager is expected to start him. Fernando Santos has a fair few options in attack. Joao Felix, Rafae Leao, and Andre Silva are all contenders for the center-forward role played by Ronaldo. However, none of them come close to the goal-scoring pedigree of the legend.

If there is one thing soccer fans all around the world have learned, it’s that you can never rule Ronaldo out.

Somehow he manages to always find himself on the scoresheet. Today’s game will be no different as Portugal will need Ronaldo’s goals to go through to the quarter-finals.