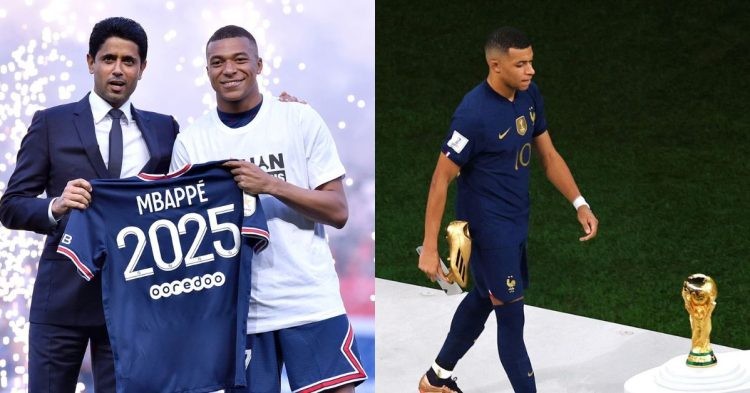 Paris Saint-Germain allegedly blocked Kylian Mbappe from moving to Real Madrid. Mbappe was apparently very close to signing for La Liga giants Real Madrid, however, PSG blocked that move. Instead, they were looking to sell him to Liverpool for an outrageous fee. Fans are surprised by the decision-making from the PSG heads. Host of The Liquidator Podcast, Liam Freeman said, “Bizarre really. Why does PSG care about where he goes?”

Bizarre really. Why do PSG care about where he goes?

One fan replied to him stating the clubs do not have a good relationship which is why PSG did not want to lose their star to Madrid. He commented, “Because of the relationship between Madrid and PSG. The two clubs really don’t like each other, especially after Madrid put in complaints to UEFA and FIFA about PSGs spending and FFP breaches.”

How? He was out of contract🤦🏼‍♀️

They don’t even have money

Mbappe was reportedly told by PSG officials that he would only be allowed to join Liverpool if he leaves the Ligue 1 champions. His big and eagerly awaited move to Real Madrid which was all but confirmed was blocked.

PSG blocked Kylian Mbappe’s move to Real Madrid and agreed to sell him to Liverpool for a massive fee.

French star Mbappe is fresh from a fantastic FIFA World Cup 2022 in Qatar. He scored an all-important eight goals for France to win the Golden Boot. He also netted a hat-trick in the final against clubmate Lionel Messi’s Argentina, despite France’s defeat.

Liverpool was first linked with the French star back in 2017. This was after his breakout season with Ligue 1 club AS Monaco. The Reds are his mother’s ‘favorite club’ and he admitted to speaking with Liverpool officials. However, he went on to sign for PSG. They took him to the French capital for a fee of $190 million.

He has registered 240 appearances for the club and scored an incredible 191 goals. In that time, PSG has bagged four French league titles. Mbappe, however, felt like he never settled at the club and has been tipped to leave PSG on several occasions. Widespread reports claimed that he would move to Real Madrid last year after running down his PSG contract. But, he shocked the world after signing a new deal at the Parc des Princes in May.

According to The Athletic, PSG blocked his move to Real Madrid and insisted that any prospective sale would be to Liverpool. The report adds that back in July, a PSG consultant, Antero Henrique, opened the door for Mbappe to join the Premier League club.

Henrique along with PSG president Nasser Al-Khelaifi demanded a fee of around $432 million, a staggering fee that Liverpool would just not have paid. Mbappe then chose to sign a new deal with PSG.