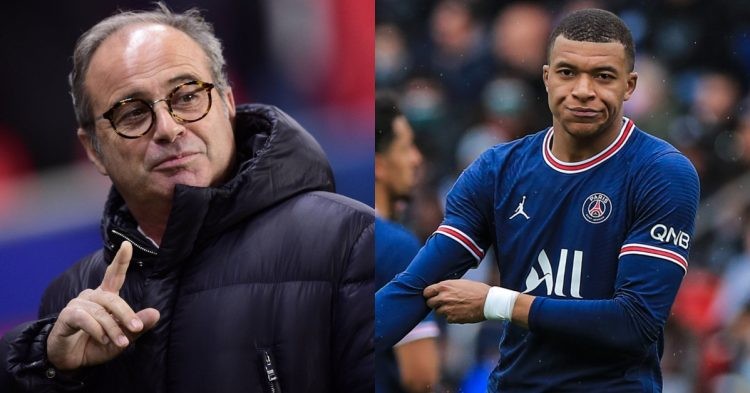 The Kylian Mbappe saga is not about to end anytime soon as new reports of him being unhappy at PSG have emerged. As per the reports, the French superstar does not see himself as a part of the club going forward and is expected to leave in January. However, PSG Director Luis Campos has finally opened up on the rumours of Mbappe’s rift with the club.

According to The Guardian, Mbappe was not satisfied with the business that the club did in the summer. On top of that, apparently, he is also unhappy to be the main striker of the team. Mbappe is at his best when he is playing on the left wing. Due to his speed, Kylian gets to run past full-backs and puts the ball in the net with ease.

However, with the presence of Neymar and Lionel Messi, Mbappe has to play down the middle. Apparently, it has upset the French international and he wants to leave. So what does the Paris Saint-Germain director have to say about the issue? In an interview with Canal Plus, Luis Campos rubbished the reports.

PSG director Luís Campos: “Mbappé has never told me about his intention to leave in January. We speak with him, Messi, Ney… we’re very happy to be here”, tells Canal Plus. 🚨🔴🔵 #PSG

“Mbappé has never told me about his intention to leave in January. We speak with him, Messi, Ney… we’re very happy to be here.”

Reliable soccer journalist Fabrizio Romano has also reported on the matter and has confirmed that Mbappe wants an exit from PSG. Hence, no matter how much Campos may try to deny it, it seems like something is definitely brewing behind the scenes. There are also rumours of Neymar and Kylian Mbappe not getting along. So it is certainly a bad look for the club.

Kylian Mbappe was running out of contract with PSG this year. He entered the 2021-22 season with that being the final year of his contract with the French club. The rumours ran rampant that the Spanish soccer club and the current Champions League trophy holder Real Madrid was going to secure his services. It looked like the deal was done and ready to be made official.

However, PSG entered the discussions at the last minute possible and offered a ridiculous contract to the youngster. According to a report from Sky Sports, it made him the highest-earning footballer in the world with wages touching close to £1 million per week. Not only that but Kylian Mbappe was also rumoured to have been given a position of authority in the club.

At the time, it seemed like Kylian was happy to be staying in Paris for 3 more years. But only a few months later, everything that could go wrong, has gone wrong. Will Kylian Mbappe stay in PSG after the recent reports? Or will he get the move that he reportedly wants in January? Let us know in the comments down below.