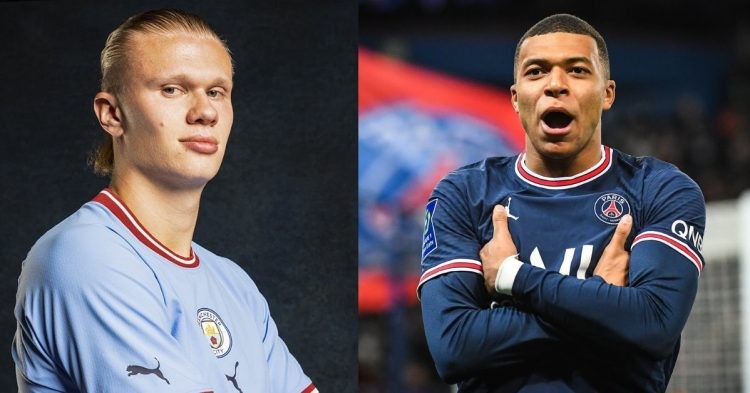 A few months ago, we saw Los Blancos being linked with an audacious move for both Erling Haaland and Kylian Mbappe.

But they failed to bring either of the superstars to Spain. Mbappe ended up extending his contract with Paris-Saint-Germain and Haaland signed for the English champions, Manchester City.

The Frenchman and the Norwegian have both been proclaimed as the two best players in the world. With the departure of Cristiano Ronaldo and Lionel Messi from the big stage, two youngsters have started to fill the gap.

Los Blancos have a clear transfer plan for future

Both of these youngsters might be at their clubs right now, but the future has hope. As we all know, rumours about an exit and links to Real Madrid are an inevitable scenario.

But, it doesn’t look like Real Madrid aren’t too concerned about both of them right now. They have a good team and are challenging once again for domestic and European glory.

The most valuable player in the world has scored fewer goals AND assists in as many games as his Man City counterpart 👀 pic.twitter.com/kUmISN0YLu

It has been speculated that after the Frenchman snubbed Real Madrid in order to sign a contract extension with PSG, his chances of joining his dream club, Real Madrid, are slim.

The Los Blancos have shifted their focus to the Norwegian, where they hope to sign a multi-million dollar deal soon.

But as of now, the best step for Real Madrid should be to keep on doing its things. They will not expect anything from Haaland or Mbappe, no matter what the clauses are. If the operation is clear, they will study it and work for it in the future.

Football fans all over the world might be thinking: what does the future hold for Mbappe and Haaland? Most fans expect them to leave their current clubs in the future for a record move to Spain.

Fans have reacted on social media neutrally. The division has been made by the two counterparts, whether Mbappe did the right thing or it was wrong.

A fan page commented, “Haaland is Real Madrid’s big target for the future, Mbappé has been DISCARDED.”

Another one added, “He discarded us 2 months ago. He has been regretting that decision ever since he made it public. He came crying at our doorstep and Perez sent him walking. We discarded him last. That’s all that matters.”

On this, another fan replied, “When did he come up crying in Madrid doorstep? Yall literally chanted his name when he played on Bernabeu. He rejected you and you are mad till the point when yall won the Champions Mbappe was remembered first before the actual players who won it.”

The last one concluded, “There is a REAL possibility that Real Madrid sign BOTH Kylian Mbappé and Erling Haaland this summer. It’s Florentino’s DREAM.”

Who do you think will win the #BallonDor first out of Erling Haaland and Kylian Mbappe? 🤔👇 pic.twitter.com/SoJXv4CxRH

As the Erling Haaland and Kylian Mbappe transfer saga continues, Los Blancos will aim for a strong season in Europe and Spain.Real Madrid travel to Elche, subsequently following a home match against Sevilla in La Liga Santander.