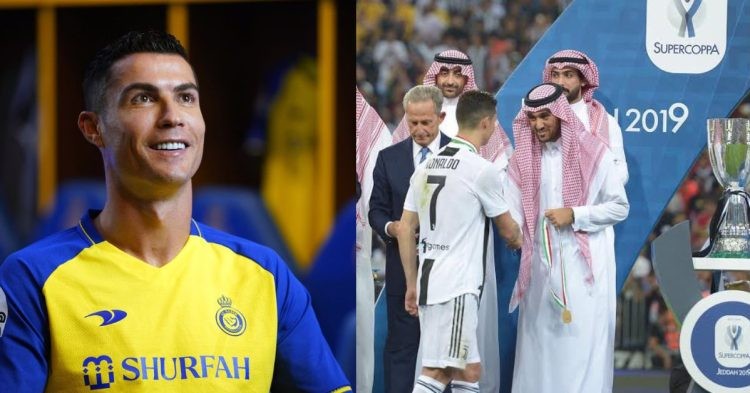 Ronaldo has met the Saudi Sports Minister during his Juventus spell (Credit: Twitter)

Cristiano Ronaldo has been the talk of the town following his unexpected move to Saudi Arabia. After many speculations throughout the December of 2022, Ronaldo committed to Al-Nassr. He is one of the most well-recognized sports personalities in the world and had a grand welcome to the country. Ronaldo was spotted with one of the most important personalities in Saudi Arabia.

Cristiano Ronaldo had all eyes on him following his mutual contract termination with his former club Manchester United. The media and fans speculated a few speculated destinations for the veteran forward. The Saudi-Arabian club Al-Nassr, however, was the front-runner in the race. With a mega offer on the table with no interest from other major European clubs on the horizon, Ronaldo committed his future to Saudi Arabia.

The 37-year-old forward arrived at the capital city of Riyadh earlier this week. The official announcement took place last week. Al-Nassr fans welcomed the biggest star to ever feature in their country like a hero. The announcement ceremony was held in Mrsool Park to give the Al-Nassr fans a chance to witness the iconic forward in their yellow and blue shirt.

25,000 fans were present in the stadium and big screens were installed all around the city for the historic moment. On the following day, a training session was held for the spectators as well. The lethal Portuguese showed his skills and finishing ability to the fans to give a glimpse of the quality he will be offering to the league.

Cristiano Ronaldo has clearly stated in his unraveling press conference that money is not the reason he joined Al-Nassr. He wants to change the mentality of people about Asian soccer. The Portuguese also believes that his move will inspire little boys and girls of the country to pursue soccer as a career. He also reminded us that Saudi Arabia is the only team that was able to beat the World Champions Argentina.

The fans are eager to watch Ronaldo make his debut, but he will not be able to play the first two matches. They will, however, be happy to see the sports icon already making positive relationships with important personalities in Saudi. Last night Cristiano Ronaldo was spotted in Diriyah, to attend ‘Diriyah Nights’.

Ronaldo arrived at the Diriyah to meet the sports minister of Saudi Arabia Prince Abdul Aziz Bin Turki Al-Faisal and his other coordinates. Prince Abdul Aziz, who has talked about Ronaldo before, greeted him with a handshake at the dinner table. They enjoyed the dinner with Lebanese cuisine. It already looks like the 37-year-old is already on his way to keeping his word about helping in Asian soccer’s progress in the upcoming days.