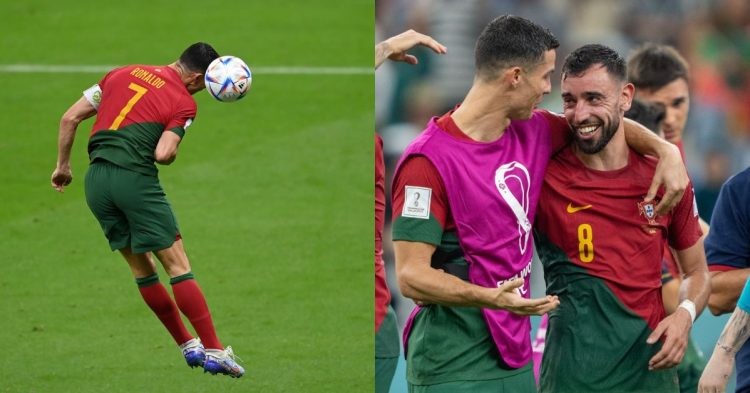 A Bruno Fernandes double so the Portuguese top their group and secure qualification to the round of 16 last night. Uruguay looked defensively solid, but despite having Darwin Nunez, Edinson Cavani, and Luis Suarez, failed to threaten the Cristiano Ronaldo-led side. Their biggest chance came though Rodrigo Bentancur’s defense-splitting run, but he shot straight at the keeper.

Good luck to the FIFA official who has to go into the changing room to tell Cristiano Ronaldo he hasn’t scored that. Bruno Fernandes has been credited with it. (BBC)

But the biggest talking point of the match yet again was Cristiano Ronaldo. He celebrated Portugal‘s first foal of the game as his own. The goal was later awarded to Bruno Fernandes, seeing that he had not actually touched the ball. Fans were angry with Ronaldo’s actions as he selfishly claimed a goal he did not score.

Piers Morgan‘s interview with Cristiano Ronaldo saw fans get angry not only at Ronaldo but also at Piers Morgan. The English journalist asked Ronaldo no difficult questions and even praised him throughout the interview. Ever since the interview, he has also shown great support for Ronaldo on social media. He even called him the greatest player the world has seen.

It was Bruno, do you need an appointment?

It should be remembered, Morgan was a great critic of Ronaldo when the Portuguese was in his first spell at Manchester United. Morgan saying Ronaldo’s head touched the ball last night came as no surprise to fans. “It was Bruno, do you need an appointment?” a troll from Specsavers official account read.

Technology in the match ball used at the World Cup proved conclusively that Cristiano Ronaldo did not make any contact for Portugal’s opener 👀 pic.twitter.com/52bDlF2ILO

Fans were not happy with Ronaldo’s claim of the goal.

Ronaldo became the first player to Celebrate A Goal he did not score 🐐 pic.twitter.com/wUbOdxtlP4

Fans did not enjoy Ronaldo’s celebration either.

Portuguese fans were happy there was a goal. They were happy to see their team progress to the next round.

Some fans, on the other hand, were convinced Ronaldo had touched the ball.

Some even commended Ronaldo for claiming the goal.

TBF I’d be trying to claim that goal if I was Ronaldo too. Nothing wrong with chasing records

Portugal face South Korea next. They have already qualified for the knockout stages but would want to solidify their position at the top of the group. All 3 remaining teams can qualify from Group H, and Portugal could qualify top if they avoid defeat against South Korea, or have a better goal difference than Ghana.