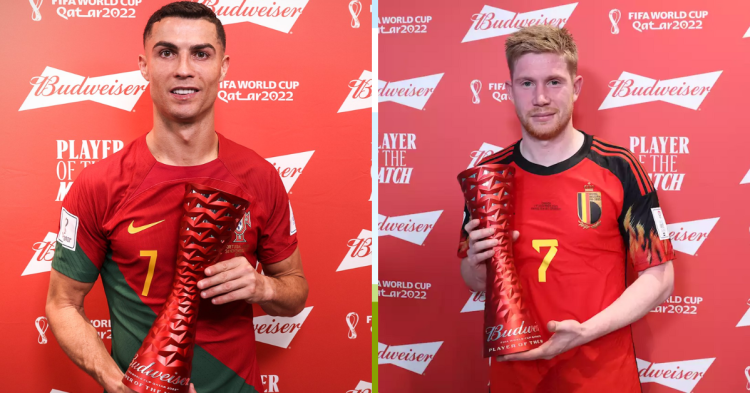 Man of the match awards was started in the 2002 world cup to give out more recognition to the individual play of players. Initially, the award was decided by the Technical study group of FIFA but from the 2010 South Africa Edition of the FIFA World Cup, the Man of The Match Award for each match is decided by the Online poll posted on the FIFA Official website. Fans can vote from the 60th minute to the 88th minute of every match and decide the Man of the Match.

Ronaldo currently has the most Man of The Match awards in his bag winning the award 7 times in 5 World cups. Lionel Messi is Joint Second with Netherland’s Arjen Robben winning the award 6 times. Next on the list is Uruguay’s Center Forward Luis Suarez with 5 wins.

Fans reaction to the Man Of The Match Awards

While some of the recipients of the award were deserving, some were not accepted by all the fans with fans registering their complaints on social media platforms.
“Ochoa, Richarlison, Saudi keeper, Valencia they all deserved it.”

A unanimous choice after THAT goal 🇧🇷

“Bro Modric, de bruyne, Ronaldo, I’m sorry to say that, but they don’t deserve it at all.”

Fans have been arguing about who should’ve received the award by giving arguments in favor of the player they think should’ve won the award. This is what one fan had to say about Cristiano Ronaldo winning the MOTM award ahead of Bruno Fernandes.

“Ronaldo did nothing played like martial and got a rigged pen, how was he the man of the match, should have been Bruno.”

Some fans think that the MOTM is a promotional strategy and only the popular player are being awarded the award for their brand value and not their performance.
“Do I think one of the main corporate sponsors of the entire event is trying to promote their products? Lol”

“The only reason the award is there is for branding”

Player’s reaction to the MOTM award

Kevin De Bruyne of the Belgium national team was shocked when he received the Man of The Match award ahead of his teammate Thibaut Courtois who saved a penalty and stopped three shots from inside the box in their 1-0 victory over Canada. Here’s what Kevin De Bruyne had to say in his post-match interview:

“I don’t think I played a great game, I don’t know why I have got the trophy. Maybe it’s because of the name. This was not good enough. We made it difficult for ourselves and stress crept into the team. There was more space than was seen and we used the long ball too often. It has to be better, myself included.”