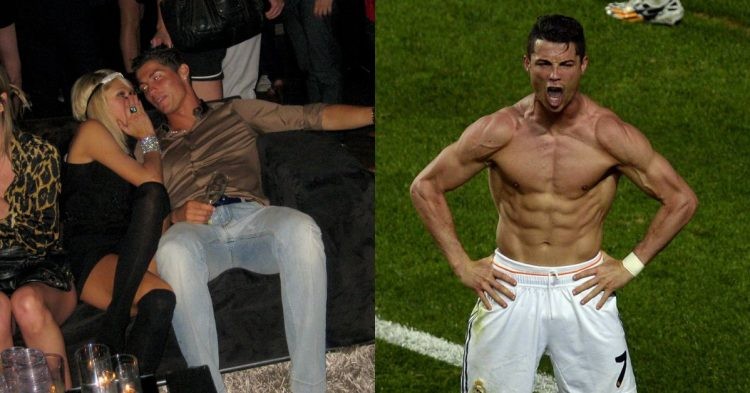 Paris Hilton allegedly believed that Cristiano Ronaldo was not man enough for her. (Credits: The Daily Star & Jump Rope Dudes)

Cristiano Ronaldo has been a mainstay in the media for one reason or another. Sometimes it is about his on-field performances and sometimes it is about his off-field life. The Portuguese star has been linked to a number of women throughout his career as a celebrity, however, none might be as high-profile as Paris Hilton. The pair were linked in 2009 but had a rough separation considering the things Hilton has said about the soccer player.

At the time they were linked, Hilton was coy on the matter but denied any romantic involvement. She said, “Cristiano and I are good friends. Very good friends. He’s a nice guy – and an incredible athlete. We’re getting to know each other and I have to leave it at that.”

when paris hilton & cristiano ronaldo
dated in 2009, but paris broke up with him because he wasn’t ‘masculine enough’ pic.twitter.com/LqL7wR3t3j

The two soon went their separate ways. However, Hilton allegedly rejected Ronaldo after deciding that he was too “sissy” for her tastes.

A source in the National Enquirer said, “She likes her guys to be macho – and as far as she’s concerned Ronaldo turned out to be a real sissy.

“She likes her men rugged, it’s as simple as that. She thought her friends would laugh at her if she dated a guy who walks around with flowers in his hair.

“He was just too uptight for her to find attractive. In the end, Paris realized their relationship simply wasn’t clicking. Paris got to know him and realized he’s not nearly hot enough.”

This event took place in 2009. 14 years on, it seems like Hilton might have to eat up her words if they were spoken by her. The Al-Nassr star, soon to become 38 years old, is one of the fittest athletes in the world of sports.

Comments on Ronaldo’s manhood were one thing but Hilton went a step ahead and allegedly hired a witch doctor to curse Ronaldo. According to BleacherReport’s sources, “The witchcraft expert has revealed that he was hired by a woman who was “deceived” by the Portuguese man”. This piece of information was not really helpful to exactly round things down. However, the witch doctor described his client as “very famous, rich, and not European”.

Therefore, the Spanish media believed that the prime suspect is Hilton. Of course, this might just be false but Ronaldo went through a difficult phase after that due to his ankle injury issues.

From Paris Hilton to Georgina Rodriguez – the most famous women Cristiano Ronaldo has ‘dated pic.twitter.com/8zxVlKnk3t

Fast forward to today, the witch doctor theory was probably completely untrue. Ronaldo has gone to date or been linked with some of the hottest women in pop culture including Kim Kardashian and Irina Shayk. He is a successful soccer player with one of the best careers witnessed in the sport.