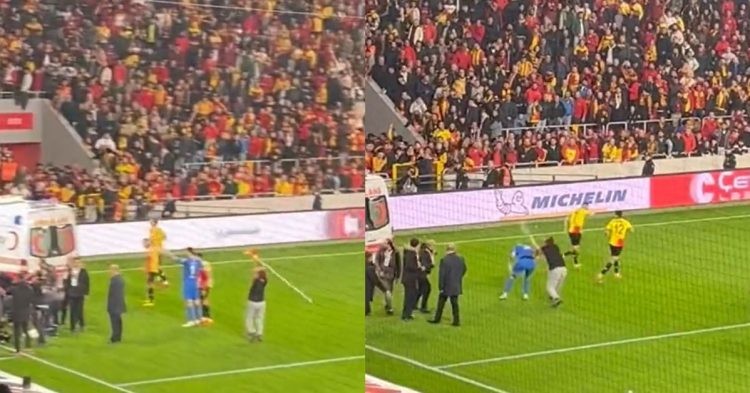 Turkish 1st division side Goztepe hosted Altay at Gürsel Aksel Stadyumu for their TFF league game. Turkish derbies are known to be fierce and fascinating. With fans Hoisting flags, making new chants, or bringing out flares are all common practices for the crowd in Turkey.

One such incident happened at the recent Derby between these two sides. The match commenced with the referee blowing his whistle.

The moment as Gözetpe fan was hit.

With both teams tied up in the first 20 minutes and pressing to find a lead so Altay fans decided to light a flair but what no one expected was throwing the flair among the Goztepe supporter’s stands. The flair hit a fan right in the face and injured two others, forcing the referee to stop the game.

Why did the fan attack Altay goalkeeper with a corner flag?

Altay goalkeeper Ozan Evrim Ozenc, accompanied by his teammates and a few Goztepe players, made their way toward the ambulance and stood there in silence.

A Goztepe fan jumped the fences and invaded the field. He grabbed the corner flag, ran from one corner to another, and whacked Ozan twice on the back of his head, shattering the corner flag.

The goalkeeper went down with his head in his arms while the Goztepe players ran. One of Ozenc’s teammates snatched the flag out of the streaker’s hand while the officials detained him.

Goztepe vs Altay in Turkey was interrupted after a fan attacked the Altay goalkeeper with the corner flag… 😧pic.twitter.com/ylfsSKmrxM

The crowd incident and the attack helped the referee to decide on canceling and rescheduling the match.

Fans react to the incident

This incident has left fans enraged as they reacted by labeling it a “dark day for Turkish football.” Here’s how they reacted.

This whole derby has nothing to do witz football. Rot in jail

A dark, dark day in Turkish football after this sickening attack on Altay GK Ozan Evrim Ozenc in derby vs Goztepe.

According to @gchahal, he was left with a 4cm gash to the head and a haemorrhage having been struck with a stick by a fan.

According to the media outlets, the Turkish police has arrested and put the streaker in custody.