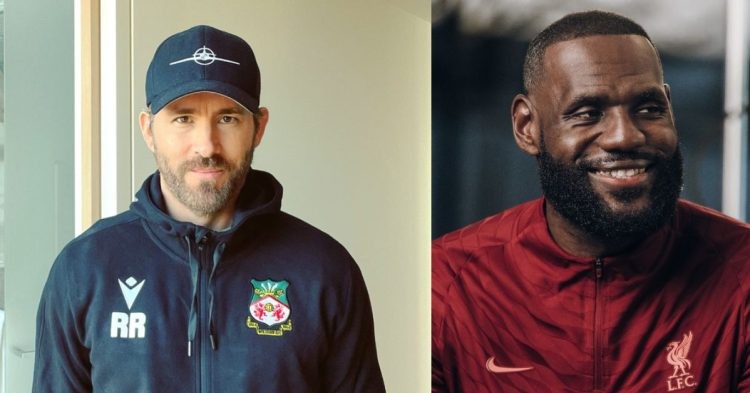 Ryan Reynolds is a hugely popular Hollywood star. While everyone is familiar with Ryan’s exploits on-screen, the fact that he also owns a soccer club is not known to all. Ryan Reynolds along with American actor Rob McElhenney took over Wrexham AFC in November 2020. Wrexham currently competes in the National League, which is the fifth tier of the English Football League system.

Recently, Ryan and Rob collaborated with EA Sports in the latest edition of FIFA, the video game, to record voice-overs. In that voice-over, Ryan and Rob can be heard making fun of Premier League giants, Liverpool FC. They call Liverpool, which is partly owned by basketball legend LeBron James, a “tiny, tiny” soccer club. In 2011, LeBron James bought a two percent stake in Liverpool FC for around $6.5 million.

What did Ryan Reynolds say about Liverpool?

Ryan Reynolds and Rob McElhenney, the co-owners of Wrexham, came together to do a voice-over on FIFA 23. If the users play Wrexham AFC versus Liverpool FC, the Deadpool star’s voice can be heard during the shaking of hands between the players prior to the match. Firstly, the in-game commentators start the match by saying, “This is a huge game for Wrexham and I believe we have a message from the owners, Ryan and Rob.”

After that, Rob can be heard saying, “Well, this is a special game – this is a big club versus a very small club.” Subsequently, Ryan says, “A giant club versus a minuscule, improvisational version of a football club.”

Rob then adds, “And of course, we’re talking about Liverpool.” Ryan then says, “Tiny, tiny club Liverpool. Tight nit community there in Liverpool, really keeping this community-owned club together. ” Finally, Rob finishes off by saying, “Very close to the massive Wrexham AFC.“

There are also further exchanges of words between Ryan and Rob during the course of the match. Some users of the game have also said that similar hilarious voice-overs by the Deadpool star can be heard if one plays Wrexham versus Stockport on FIFA 23. However, it will be interesting to see how LeBron James reacts to this incident.

‘Welcome to Wrexham” the story of @robmcelhenney and @vancityreynolds buying a football club on @disneyplusmena is so good, mainly because it tells real stories of people, it’s not a pure football of business show, but about how a club can mean so much to a town of 65,000 people pic.twitter.com/lbHmdkXx5F

Currently, Ryan’s Wrexham AFC is second in the National League, two points behind first-placed Notts Country. While it seems unlikely that Ryan and LeBron James’ club will go head-to-head soon, Wrexham will be looking to get promoted to League two, the fourth tier of the English Football League. Wrexham, who almost came close to achieving promotion last season, has remained in the National League since 2008.