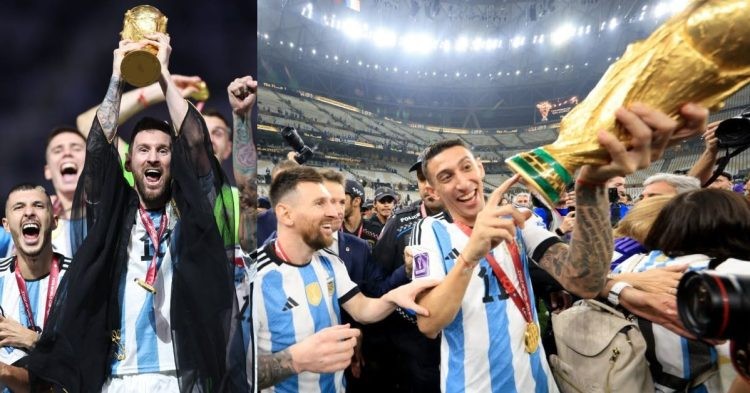 Lionel Messi made history on and off the pitch at the end of the last year. He became a World Champion with Argentina in a historic win against the former champions France. Messi posted a picture of the historic moment on his Instagram and it broke the record of the most-liked post on the platform ever. Recently, news surfaced in the media that the trophy Lio Messi held might not be the real World Cup trophy.

Lionel Messi unknowingly lifted a replica made by an Argentinian couple that gave it to the players.

It was Angel Di Maria who pointed it out to him as he had the real one. 😅 pic.twitter.com/CCNA98VmXf

A report from Clarin said earlier this week, that the trophy Leo Messi held at the early parts of the celebration was just a replica. According to the report, an Argentinean fan Paula Zuzulich made that trophy. She explained the situation to Clarin in an interview.

Paula said, “Before the World Cup we got in touch with people who make trophies and it took six months to make it… The idea was to get the players to sign it, but in the end, they took the trophy three times down to the pitch. First, a member of [Leandro] Paredes’ family got him to sign it,” about how the trophy made it to the ground.

She added to the story, “The second time we were asked for it, it was down there for 45 minutes, being passed from one player to another, from one relative to another. We were having fun but we wanted it back. That’s when I shouted to a couple of players: ‘That cup that Paredes has, it’s ours,” about how they tried to get their trophy back.

Paula at the end finally got the trophy at the end though. She said, “In the end, Lautaro Martínez signed it and brought it back over. Then FIFA security arrived and asked us to hand it over to make sure it wasn’t the original.” She detailed the whole story of traveling that trophy around the pitch for quite some time before ending up with her.

Lionel Messi held that trophy for quite some time. Those moments produced a record-breaking picture on Instagram which is on its way to achieving 75 million likes. Messi didn’t realize it until Angel Di Maria told him about it, as he had the original World Cup trophy handed by FIFA President Gianni Infantino.

Soccer fans worldwide reacted hilariously to this incident. We all saw Salt Bae holding the trophy and taking a selfie with it. One fan said, “Salt Bae took the original trophy,” referring to the incident. Most of the fans seemed like they don’t care about the originality of the photo and one of them said, “it’s about the value of the photo, no whether it’s fake or not LOL,” explaining the irrelevance of the situation.

The photo broke the platform record with the most likes. One fan indicated that and commented, “Imagine Messi deletes it and reposts it with a real photo.” At the end of the day, it is definitely about the moment and one fan said, “People are liking the moment and journey behind this, not the trophy,” which summed up the situation perfectly. The originality of the trophy isn’t going to tarnish the historical moment by any means.