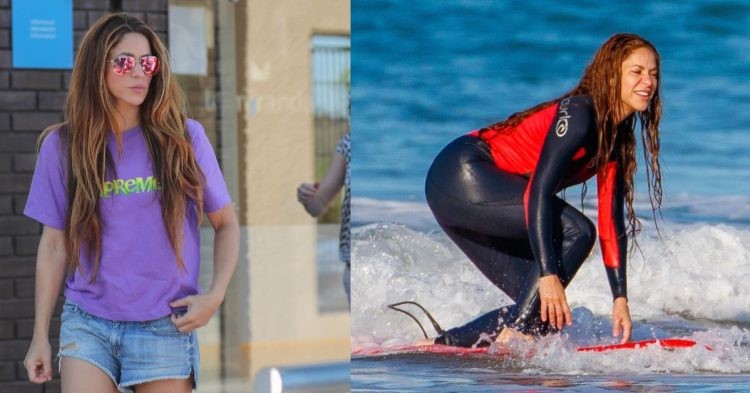 Shakira is enjoying her holidays at Cantabria (Source: Twitter)

A breakup is tough for every person, and Colombian singer Shakira is no stranger to it. Ever since Shakira split up with soccer star Gerard Pique, life hasn’t been smooth for her. From fighting over child custody agreements to facing legal charges for tax evasion, Shakira’s troubles have been going on and on.

Shakira was seen in Cantabria with her kids

Shakira was recently spotted in Cantabria, a place she used to frequent with her ex-boyfriend Gerard Pique. The Colombian songwriter was seen surfing with her two kids, Sasha and Milan. Surfing has been Shakira’s passion for several years now. Shakira’s surfing coach, Gorka Ezkurdia, was also seen alongside the Barranquilla-born singer.

Although there have been rumors of Shakira dating Gorka, the Waka-Waka singer has rubbished the reports. She claimed, “Out of respect for my children and the vulnerable moment they are going through, I ask the media to stop the speculation. I do not have a partner or any interest beyond devoting myself entirely to my children.”

According to the agreement, the 45-year-old will move to Miami with her kids, Sasha and Milan, and will continue to reside there. Meanwhile, Gerard Pique, the father, will continue to live in Barcelona. However, Pique can go and visit his children in Miami.

Is Shakira still not over Gerard Pique?

After Shakira was spotted at Cantabria, fans believe that she is still not over Gerard Pique. The couple had been together for over 12 years, and they announced their separation in June this year.

Cantabria was one of the favorite holiday destinations for the former couple, Shakira and Pique. They have been pictured on numerous occasions previously, enjoying the beach with their children. Therefore, the fact that Shakira has gone back to Cantabria, albeit this time without Pique, has had the fans questioning whether the Colombian pop star has truly moved on.

Shakira and Pique parted ways after the singer found out about Pique’s infidelity. The Grammy-winning singer recently arrived in Barcelona to ratify the court agreements over the child custody and visitation agreements. After the legal procedures are over, the Colombian will move back to Miami with her children, while the former Spanish international continues to live in Barcelona with his current girlfriend, Clara Chia Marti.