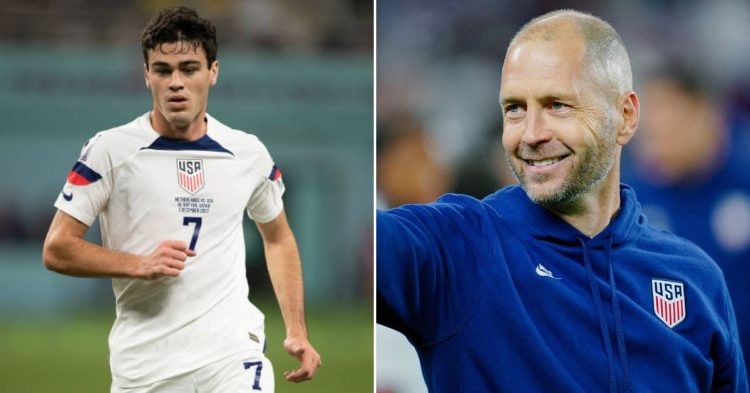 U.S. Soccer has been hit with the shocking news that seems to be the talk of the town today. It involves one of the biggest stars on the USMNT and his family, surprisingly. Gio Reyna is a midfielder who represents the USA and currently plays for the German club Borussia Dortmund. He, along with his parents, is involved in a controversy regarding the head coach of the team, Gregg Berhalter.

Gio Reyna found himself in hot water after Berhalter publicly claimed that there was a player in the FIFA World Cup team who did not satisfy his expectations. He did not reveal the name of the player. However, many pointed the finger at Reyna after reports of a rift between the two emerged. This led the youngster to take it to Instagram.

He wrote, “Just before the World Cup, Coach Berhalter told me that my role at the tournament would be very limited.  I was [devastated]. I let my emotions get the best of me and affect my training and behavior for a few days after learning about my limited role.” The youngster also mentioned that he apologize to his coach and teammates for his behavior.

Together with that, Reyna also mentioned that he was disappointed with Berhalter. The main reason was that his head coach aimed to keep the issues in the locker room within those walls. Unfortunately in Gio Reyna’s matter, that wasn’t the case. To make matters worse, Gregg’s comments about “Reyna” to the world didn’t go down well with his mother, Danielle Reyna.

According to Gregg Berhalter’s statement on Twitter, an unknown individual contacted the US Soccer Federation and claimed that they could take him down. This was regarding the domestic violence report that had been floating around for a while. He claimed that he kicked his wife, Rosaline, in the legs during an argument. Gregg admitted that he was under the influence of alcohol at the time of this incident.

Later on, Danielle Reyna came clean and admitted that she called Earnie Stewart (U.S. Soccer Sporting Director). According to ESPN, Danielle mentioned that she did mention Gregg’s domestic violence history to Stewart.

She claimed, “Without going into detail, the statements [Gregg Berhalter’s] from yesterday significantly minimize the abuse on the night in question. Rosalind Berhalter was my roommate, teammate and best friend, and I supported her through the trauma that followed.” Ultimately, Danielle wished that Gregg displayed the same “grace” she did, to her son Gio Reyna.

The entire saga has got the country talking. Soccer fans now believe that Gio and Danielle Reyna are entirely responsible for the turmoil caused. A fan even tweeted, “She just tanked her sons career badly.” This indicates that Danielle’s comments might end up affecting Gio’s career with the USMNT after all.

She thinks the world cup is college football where a because she donates to the school she has a say.

Gio Reyna is UNSIGNABLE. I wouldn’t want him on my team. Danielle (Gio’s Mom) going to USSF about the domestic violence incident in 1991 between Gregg and his now wife (blackmailing). Shame on Danielle b/c your child didn’t get the playing time you think he deserved #USMNT

hope it was worth it, because I don’t see how gio is allowed to step foot on a pitch wearing a USA shirt ever again after this

So lame. Oh you said bad things about my son, let me dig up 30 year old dirt. Fantastic job Karen.

Following these events, the US Soccer Federation disclosed that Gregg Berhalter was under investigation for the 1991 incident. Due to this, Anthony Hudson would be the head coach of the USMNT temporarily. Earnie Stewart has mentioned that Berhalter might become the head coach once again, depending on the outcome of the investigation.

Whatever the case, soccer fans believe that Danielle Reyna should not have got herself involved in the matter. Gio Reyna’s future is still at play. There has been no word on whether action would be taken against any of the parties. We would have to wait before we get official confirmation from the authorities.