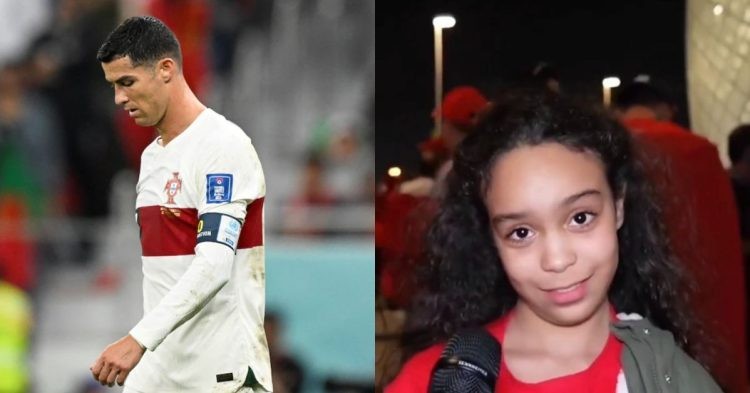 Cristiano Ronaldo has been the hot topic of media for over a decade now and it is safe to say that he has been on the receiving end of it for most of his career as the narrative has always been against him. His form this season has been far from his old self which resulted in him having a barren start to the season with Manchester United and eventually led to the termination of his contract, and his form with his country has been the same which resulted in Portugal crashing out of the World Cup at the hand of Morocco.

This was seen as a huge upset by fans across the globe as nobody gave them the chance and when they did the unthinkable, one Moroccan fan girl was seen to be ridiculing Ronaldo after he left the Al Thumama Stadium in tears. The video got viral over the internet and the girl could be heard saying: “Where’s Ronaldo? He’s Crying in his car…Poor Ronaldo”

This video didn’t go well with Ronaldo fans and they lashed at the girl for ridiculing one of soccer’s greats but the other section of fans condemned lashing out at such a young girl and the fandom was divided. The attacks on social media had caused an effect on the mental health of the girl and soon after, her parents came out and apologized to the fans.

The famous YouTuber IShowSpeed who is known as one of the biggest Ronaldo fans globally latched onto the scene after he uploaded a video where he was heard saying: “Who is this girl? Where she at?”. But soon after the condemnation by the rival fans for attacking a child, Speed deleted the video from his official handle which could be seen as a step taken after retrospection.

But it looks like the tide has turned as the girl could be seen wearing an Al-Nassr shirt in a stadium after Ronaldo’s transfer to the Saudi club. This seemed rather impossible after the viral video had shown the girl to be ridiculing Ronaldo ruthlessly. Soccer fans and particularly Ronaldo fans around the globe have reacted to this viral image of her donning an Al-Nassr shirt.

A Cristiano Ronaldo fan page uploaded the image of the girl and congratulated her for turning into a fan after being a ‘hater’ after her photo went viral on Twitter.

From Hater to a fan ❤️ pic.twitter.com/ZUI44VbKeL

But this post was met with some criticism by certain fans who called out the fan page for labeling the child as a ‘hater’ which is quite reasonable as the Ronaldo fan pages very unjustly started attacking the innocent girl.

She was never a hater man she’s just a child 😭😭

She was supporting her country. She’s just a child who mimicked the adults. Either a fan or a hater that doesn’t affect anyone honestly, she’s a kid let her be.

When was she even a hater 😭🤦

Another fan took a jibe at the Cristiano Ronaldo fan base for calling the child a hater for no reason in the past and sending her death threats.

Soccer fanbases can turn into toxic armies certain times and attack innocents for no reason and this was such a case but it is good to see that the Ronaldo fanbase has left everything in the past. We hope that the girl has recovered from the mental trauma she was in after being subject to death threats by millions all over the internet.