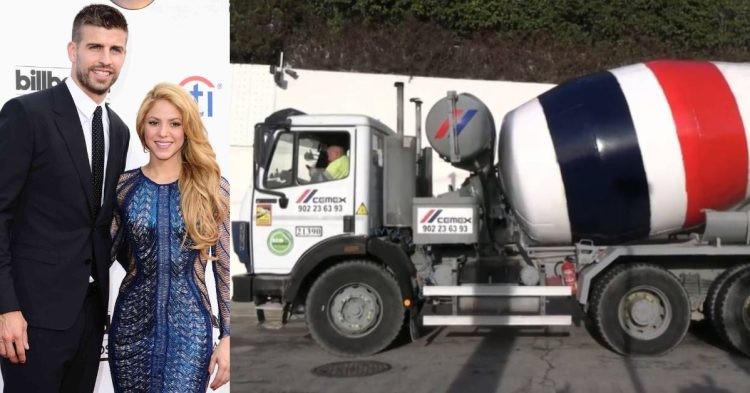 Shakira is reportedly building a wall between her and Gerard Pique's parents house. (Credits: Twitter & Marca)

Shakira is reportedly building a wall to separate her house from her ex-in-laws who live next door. The Colombian singer separated from Gerard Pique in the summer of 2022. She had planned on moving to Miami with her children after winning their custody. However, her plan had some roadblocks so she had to stay back in Barcelona. Pique moved out of the house but his parents still live next door.

Shakira is currently building a wall to separate her house from her mother-in-law’s house.

This living arrangement has become an issue for both parties due to the bad blood between them. To help ease matters, it is reported that Shakira is going to build a wall to create a partition between the houses. The two houses, despite being different and independent from each other, are connected in some way or the other.

According to a report by Marca, a cement mixer was spotted working in the vicinity of Shakira’s home. She is apparently putting up a wall in a bid to make both properties more independent.

Shakira’s living arrangement next door to Pique’s parents is more of an issue after she launched her new hit, the ‘BZRP Music Sessions #53’ with Argentine rapper Bizarrap in which she criticized Pique throughout the song. Several conflicts between the Colombian singer and Montserrat Bernabeu, mother of former FC Barcelona player Pique, have been brought up.

One of the conflicts that have taken place over the past week involved a black witch mannequin. It was placed on the terrace of the house where Shakira lives. The mannequin was placed in a way that looked directly at her former in-laws’ house. Pique’s mother took offense to this and reportedly asked for it to be removed.

Shakira’s new song, “BZRP Music Sessions Vol. 53” has been playing loudly inside her property. The song in which she insults Pique and his new girlfriend Clara Chia Marti is being played so loud that it can be heard next door.

The ‘Fiesta’ Show crew on the Telecinco TV channel claimed, “I think it is so that the in-laws can hear it.” This could be true since the houses are very close. If the windows are open it would be very easy to hear.

The lyrics in her song include a verse where she says, “I’m worth two 22-year-olds, you traded a Ferrari for a Twingo; you traded a Rolex for a Casio.” This is an indirect attack on Pique’s girlfriend Clara. Pique, however, did not let it slide. He was heard saying that Casio lasts a lifetime and was even seen wearing the watch. He also bought a Renault Twingo to clap back at Shakira.