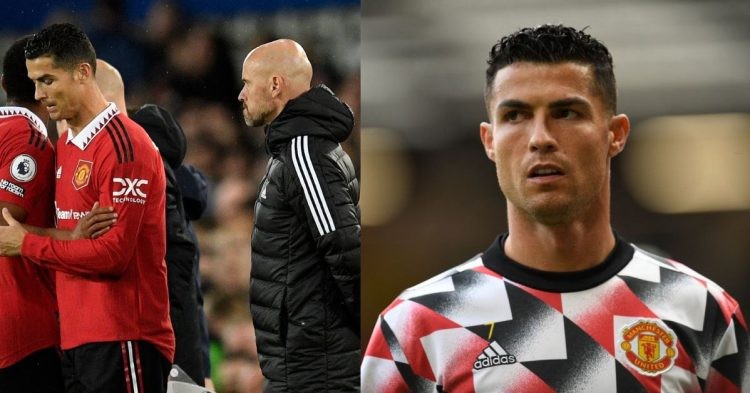 In a shocking interview with Piers Morgan, Cristiano Ronaldo launched an unbelievable attack on Manchester United and their manager, Erik ten Hag.

The incredibly open conversation between the Portuguese superstar and the TalkTV show is undoubtedly going to spell the end of his United career. It revealed that the player feels “betrayed” by the team and said he has no respect for Ten Hag.

Ronaldo, one of United’s all-time greatest players, returned to Old Trafford in August 2021 for a second stint to fight for the big prizes.

However, he has never appeared clutch and disciplined since returning to Manchester. Eventually, United struggled to contend for the top honors.

He was benched for the Premier League match against Chelsea last month. Ronaldo had left Old Trafford before the end of the first half against Tottenham and refused to play as a replacement.

Since then, the five-time Ballon d’Or winner has made only one appearance for United. He was the captain of the squad against Aston Villa earlier this month. However, it is obvious that Ten Hag is not a big fan of his.

Furthermore, he added, “Yes, not only the coach but the other two or three guys – they’re around the club. They are trying to get rid of me at the club.”

Ronaldo is unhappy because he feels like Ten Hag and other senior members of the Premier League team are trying to get rid of him.

Ronaldo told Morgan that he feels disrespected by the way he has been treated. Also, he has been painted as the club’s “black sheep” and is to blame for everything.

When asked about the senior executives he said, “I don’t care. People should listen to the truth. Yes, I felt betrayed and I felt like some people don’t want me here, not only this year, but last year too.”

Additionally, Ronaldo delivered a critical assessment of Manchester United’s state of affairs. Evidently, he alleged that the team has made “zero” improvement since the departure of Sir Alex Ferguson in 2013.

He added, “I don’t know what’s going on but since Sir Alex Ferguson left I saw no evolution in the club, the progress was zero.”

“For example, we have an interesting point that, how the club as Manchester United after [they] sack Ole [Gunnar Solskjaer], they buy – they bring, sporting director Ralf Rangnick, which is something that nobody understands. This guy is not even a coach.”

A fan commented, “Cristiano Ronaldo was so desperate for 90 minutes that he went on Piers Morgan’s show.”

A second added, “Dark corner for what? Players get benched all the damn time. Move on if you feel unwanted…or no he can’t, no top clubs wants him. Man should just hang them up after Qatar.”

🚨 Cristiano Ronaldo to @PiersMorgan: "Nothing has changed here since Sir Alex left. When I decided to return to Manchester United, I followed my heart".

"Sir Alex Ferguson said to me: ‘It’s impossible for you to come to Manchester City!’.

And I said: ‘Ok, Boss’". pic.twitter.com/DMHQss2rYX

A third said, “As a United supporter for more that 40 years I feel betrayed by Ronaldo too, he disrespected the team by not going with them on pre season and felt disrespected too by him leaving the field when we played arguably out best match against spurs too.”

The last one concluded, “Which team is going to want him? He’s too expensive and he’s bad in the changing room, for morale. His only choice will be Middle East, China or USA.”

For the 2022 FIFA World Cup, Cristiano Ronaldo will travel to Qatar with his national squad. In a few weeks, the biggest football event in history will begin.

During the World Cup’s league stage, South Korea, Ghana, and Uruguay will compete against Portugal. To win the FIFA World Cup’s top prize, Cristiano Ronaldo will try to recover from his setback.