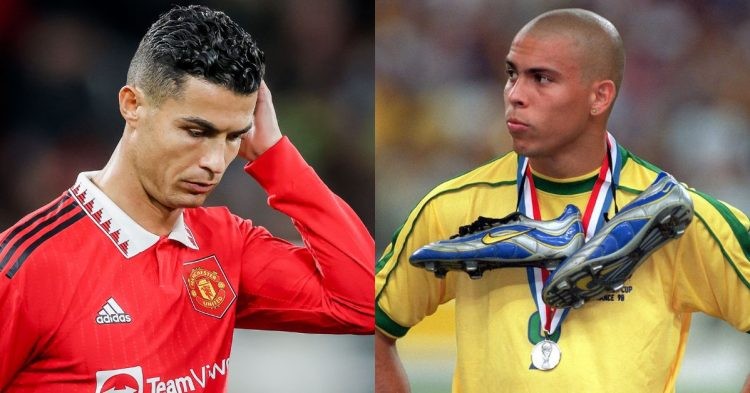 Cristiano Ronaldo currently has a huge legacy in the soccer world. He has won many accolades, such as 5 UEFA Champions League trophies, 5 Ballons d’Or, 4 European Golden Boots, and many more. Since making his debut in 2003, he has cemented his status as one of the greatest players of all time.

However, a former player does not think so. The legendary Ronaldo Nazario, often known as “Brazilian Ronaldo”, left the Portuguese star out of his best players list.

Does Cristiano Ronaldo deserve to be addressed as one of the greatest of all time?

According to SPORTbible, Nazario said, “I think there is a very, very special group where you have Diego, Messi, Cruyff, Beckenbauer, Pelé, Van Basten, Ronaldinho. I would include myself. Let the fans say, let them debate it in the bars. But you can’t rank them, can’t compare generations.”

The fact that he included himself on the list may not be surprising at all. The Brazilian icon won 2 Ballons d’Or during his career. If that wasn’t enough, he also boasts 2 FIFA World Cup wins, (1994 & 2002). In addition to that, Ronaldo has also scored 295 goals in 452 games in his career. However, the fact that he excluded Cristiano Ronaldo leaves will leave many baffled.

Cristiano‘s achievements are often underrated by many. That would mainly be because of his situation at Manchester United right now. For context, United’s manager Erik ten Hag, banished him from the team, before leaving him out of the squad to face Chelsea yesterday.

Moreover, the Dutch coach has also isolated the legend from the rest of the team, after Cristiano’s controversial antic to leave the game before it even ended when Man Utd hosted Tottenham at Old Trafford, which caused a backlash.

Nazario mentioned the likes of Lionel Messi, Pele, Diego Maradona, Johan Cruyff, Marco van Basten, Franz Beckenbauer, and the legendary Ronaldinho. There is no doubt that all the players he listed are icons in the soccer world. However, many will expect that Cristiano’s impact on the game and achievements will have some say in where he finishes on the all-time list.

After all, the former Real Madrid no.7 is the all-time top scorer in the sport, as well as the Champions League. Ronaldo Nazario’s decision to leave Cristiano Ronaldo out will be something that fans may wonder about for some time.