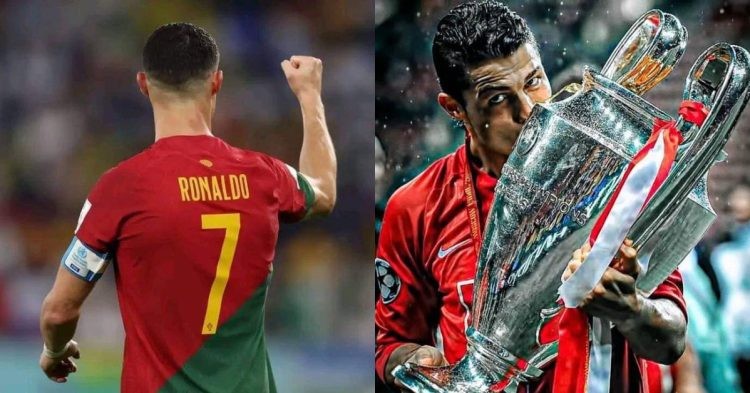 Cristiano Ronaldo has earned the right to be called a veteran of the game. He has been around for a long time, after all.

In the words of Peter Drury, “Madeira, Manchester, Madrid, Turin, and Manchester again.”

The five-time Ballon d’Or winner has been winning the hearts of fans wherever he has played. During his initial years as a “trembling teenager of touch and tease”, showcasing his flair and skill with the ball. Later, by simply scoring exorbitant amounts of goals, some of them, quite inexplicably.

It’s fair to say that Ronaldo has set himself up for an unforgettable legacy.

This was showcased in 2021 when after a failed experiment in Turin with the Old Lady, a return to the Red Devils was on the cards. However, days before the Manchester United move fell through, there was controversy. Reports of Ronaldo’s agent, Jorge Mendes, meeting with representatives from Manchester City, were pouring in.

This caused quite a meltdown of the Old Trafford faithful before ultimately the Reds announced the deal on social media.

The reunion proved to get off to a majestic start before United’s season soured with fans and pundits placing much of the blame on the Portuguese legend.

The arrival of Erik Ten Hag in the summer was followed by the goal poacher’s relegation to the bench. Relations between Ronaldo and United deteriorated to their lowest point when the most followed man on Instagram had an interview with journalist Piers Morgan.

In this interview, Ronaldo made some less-than-ideal comments about the Red Devils and their manager, Erik Ten Hag.

You can watch my Ronaldo interview live on our YouTube channel here: https://t.co/d514tOqX1z

A few days after that, reports were pouring in, linking Ronaldo to Saudi Arabian club Al-Nassr in a mega-money move.

How much is Cristiano Ronaldo’s Al-Nassr Deal Worth?

At Manchester United, Ronaldo bagged somewhere around half a million USD per week!

If his deal with the Saudi club goes through, it will make Ronaldo one of the best-paid athletes in the world.

There are many reports from different media houses and journalists. All of them are reporting different figures that he will be earning in Saudi. There seems to be a consensus that the proposed offer on the table is worth more than $200 million, over three years.

The Saudi Arabian club will be hoping to sign Ronaldo as the face of Saudi Arabian soccer. This move may lead to the overall development of soccer in the gulf country.

Cristiano Ronaldo does not care about many things as passionately as he cares about his legacy. This is evidenced by his move to United instead of City in 2021.

However, a year later, it seems to be clear that the legend is at the twilight of his career. His agent, Jorge Mendes has tried to find a new European Club for him in the summer but failed. This is largely because most teams don’t want to invest in a 38-year-old. And the teams that are interested in him, simply can’t afford him.

As his move to the Gulf edges closer, soccer fans online are less than pleased.

I know a man who is ruining his whole legacy by not admitting that he is finished and not retiring
.
.
.
🤣🙏
His t name is Cristiano Ronaldo 🇵🇹 pic.twitter.com/fSdiz1R94y

I thought it was about legacy and not money… 🤦‍♂️

Should the move go through, fans will probably be realizing that the beginning of the end of the “GOAT” era of  Cristiano Ronaldo, and his nemesis, Messi, might be coming to an end after what feels like an eternity.