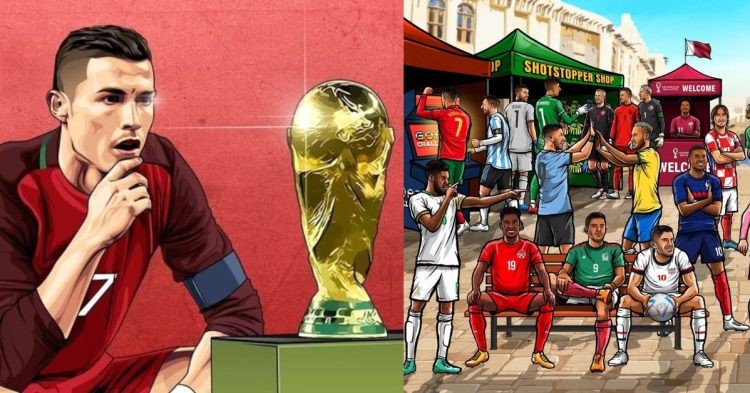 Cristiano Ronaldo and FIFA's advertisement for the World Cup (Credits: Twitter and FIFA)

The FIFA World Cup 2022 is upon us with Qatar taking on Ecuador in the opener on Sunday. Before any World Cup, many predictions are sent across. But the most predictable thing about a World Cup is its unpredictability. Recently, a supercomputer was used to predict the winner of the World Cup. It gave its answer in the form of Lionel Messi‘s Argentina beating Cristiano Ronaldo and Portugal in the final.

Another stat dug up by MARCA states that it will be Cristiano Ronaldo’s Portugal which will win the World Cup this time around. The stat has held true since 2010, and it might just hold true again with Ronaldo. Portugal will kick off their World Cup against Ghana next Thursday.

Cristiano Ronaldo has featured for Portugal in every World Cup since 2006. He has played 17 matches in World Cups so far, scoring 7 goals and providing 1 assist. He has received 4 yellow cards in World Cups and 0 red cards. With Ronaldo, Portugal’s best finish was 4th place in his debut season in 2006 in Germany. His most recent World Cup saw him knocked out by Uruguay in the Round of 16.

Cristiano Ronaldo’s & Messi’s world World Cup stats. One last time we will witness these two 🐐 in the World Cup! 🤩

Cristiano Ronaldo pips Messi in having 211 minutes between World Cup goals, compared to Messi’s 271. Messi has more assists than Ronaldo in World Cups. Ronaldo scored 4 goals in the Russia World Cup in 2018. He even scored a hattrick in the notable 3-3 draw against Spain.

Who are the favorites to win the FIFA World Cup 2022?

Perennial favorites France and Brazil both have solid squads this time around as well. England, Belgium, and the Netherlands are some of the European teams that could have serious bids to win the World Cup. Argentina is going into the World Cup unbeaten since 2019 and has beaten UAE 5-0 in a warm-up game. This has made them a very strong contender for this World Cup.