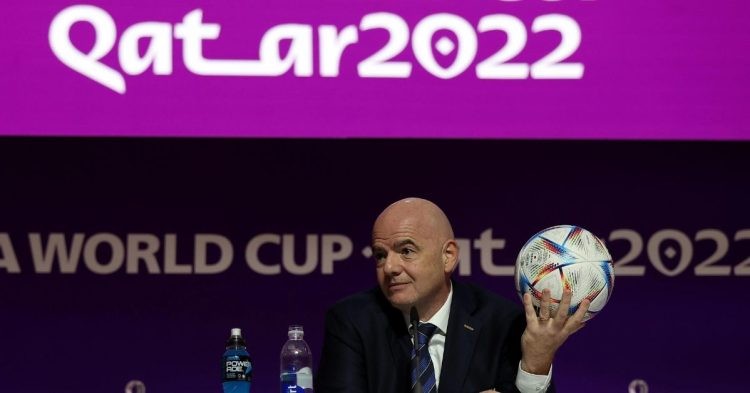 In a fiery 90-minute press conference on the eve of the World Cup in the capital of Qatar, Doha, the Swiss Italian, Gianni Infantino left no cards unturned.

He spoke in favor of the Host country stating, “much of the criticism aimed at the tournament hosts was profoundly unjust, with the western world guilty of double standards.”

The death of migrant workers and Qatar’s strict rules for LGBTQ people have seen the tournament organizers facing criticism from all corners. However, Infantino has stood up in support of the World Cup organizers and said the hate spread against them has been unfair.

“For what we Europeans have been doing for the last 3,000 years, we should apologize for the next 3,000 years before starting giving moral lessons to people,” he added.

Being a son of a migrant worker from Italy, the Middle Eastern country has “made progress” in improving the rights of migrant workers, said Infantino.

When asked about Qatar and its rules against the LGBTQ community, “I have been speaking about this topic with the highest leadership of the country. Several times, not just once. They have confirmed, I can confirm, that everyone is welcome,” the FIFA president said.

Critics also questioned Qatar for banning the sale of alcohol inside stadiums during the tournament. “Every decision that is taken in this World Cup, is a joint decision between Qatar and FIFA,” said the president.

“Every decision is discussed, debated, and taken jointly. There will be fan zones and over 200 places where you can buy alcohol,” Infantino said. He also pointed out, “It isn’t unusual as drinking inside football stadiums is banned in major European nations such as France, Spain, Portugal, and Scotland.”

Fans are left outraged by FIFA president Gianni Infantino’s speech as he hit out at criticism of Qatar from Europe on the eve of the World Cup.

Can’t actually believe what I’m reading. This is absolutely astounding. A white man using his privilege and platform like this is tone deaf. https://t.co/bgySIlsb6q

Wtf does he even mean by this? https://t.co/xcqNmMCO3S

This is really the worst statement he could have made https://t.co/szqD4S5wAM

It's not just that they are irretrievably corrupt, it's that they're astonished you would even have a problem with it. How dare you challenge them.

The biggest clubs and FAs in the world should break away and start again.

Nuke this system from orbit. Only way to be sure. https://t.co/qWOejoxK1c

“And as far as ticketing and hospitality rights are concerned, we are at almost $200 to $300 million more than the last World Cup.”

Qatar will kick off the 32-team tournament on Sunday against Ecuador. Infantino praised the Gulf country for their impressive work in preparing for the matches. “Doha is ready. Qatar is ready. It will be the best World Cup ever, of course.”