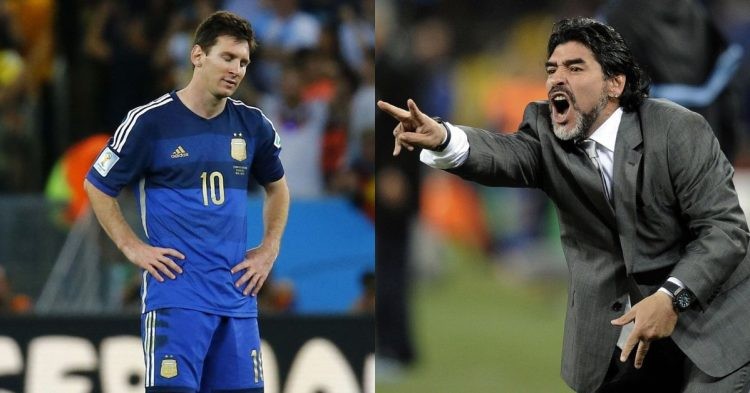 Diego Maradona was ruthless in his criticism of Lionel Messi from what he had seen during his time as manager. Maradona was the manager of the Argentina national soccer team from 2008 to 2010. He oversaw the 2010 FIFA World Cup. After Argentina was ousted by Germany in the quarterfinals, Maradona got to know that Messi was crying in the shower.

“I saw him crying in the shower when we lost 4-0 [to Germany], while some higher ranked players were looking for early flights home,” he said to TYC Sport in 2019. He added, “I saw Leo crying like a 5-year-old child.”

After this experience, Maradona believed that Messi did not have the ability to lead a team. During a conversation with Brazilian soccer legend Pele, Maradona was heard saying that Messi “is a good person but he has no personality. He doesn’t have enough personality to be a leader.”

Maradona respects Messi’s ability as a player and has no doubt about his qualities. He said to El Diez in 2018, “Messi is an extraordinary player. There’s nothing to say about what he does on the pitch. He asks for the ball, he demands the ball, he looks for the ball.”

But he asked the country to stop worshipping him as he might not be the man to lead them to trophies. “It’s useless to try and change a man into a leader when he goes to the toilet twenty times before a match,” Maradona said. “Stop worshipping Messi,” he added.

Maradona died in November 2020, at the age of 60. Unfortunately, he could not witness the greatness of Messi that was to come.

After pressure mounted on Messi, he gave up his Argentina dream and retired from International soccer in 2016. Six weeks later, however, he came back as the Argentina fans urged him to do so. A few more years of failure followed. Until the faithful July of 2021. Lionel Scaloni and Messi led Argentina to their first major trophy in almost three decades as they lifted the Copa America in 2021.

Argentina defeated Italy 3-0 to win the Finalissima trophy in June 2022. Then came the holy grail in December 2022. The FIFA World Cup in Qatar that Messi had stated will be his final chance to win the World Cup. The little Argentine came in clutch. He delivered on the biggest stage and won the player of the tournament award at the World Cup. He scored an all-important brace in the final that helped his nation secure their first World Cup in 36 years.

This is what Lionel Messi Argentina achieved in a space of 18 months.

Messi was criticized not only by Maradona but by many from the soccer world for an apparent lack of leadership skills. He proved them all wrong by leading his nation to the biggest of triumphs.