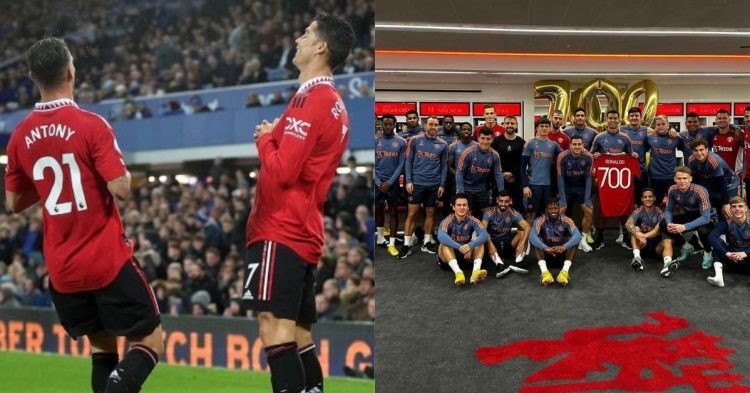 Cristiano Ronaldo has struggled to score goals this season, but he did manage to score one against Everton, giving him his 700th club goal. In the 29th minute, Martial suffered an injury, necessitating Ronaldo’s substitution. Just before halftime, Casemiro assisted him on a stunning goal.

Our no.7️⃣ celebrated his 7️⃣0️⃣0️⃣th club goal in unique fashion on Sunday night…

Ronaldo received a precise pass from Casemiro and beat Seamus Coleman to score his 700th club goal in the bottom corner. Fans had anticipated that he would perform his trademark “siu” celebration for his record-breaking goal, but instead, he hugged Marcus Rashford and performed a new celebration with Antony in which they both stood straight with their heads back, eyes closed, and fingers crossed in front of their chests.

Manchester United have confirmed on their official website that “Ronaldo’s celebration was a self-deprecating in-joke with his fellow team-mates, highlighting the strong bonds among the players in Erik ten Hag’s squad.” The posture in which Cristiano Ronaldo sleeps when traveling with the United team was referenced in his celebration against Everton, which wasn’t missed by his teammates.

The dressing room has even celebrated his 700 club goals at Carrington. In a picture posted on United’s social media, it is noticed that Ronaldo has received a special shirt with a 700’ shirt and balloon. Ronaldo has scored 144 goals for Man Utd, 450 for Real Madrid, 101 for Juventus, and five for Sporting CP. In previous season, he had managed to score 18 Premier league goals and 6 Champions league goals. But, this season he has found it difficult to find a spot in the Premier League starting eleven.

Ronaldo’s Siu celebration is iconic although his new celebration receives favorable feedback from admirers, who comment that it is “cold.” Fans believe Antony who celebrated beside Ronaldo can be the next baller as he creates history with a goal against Everton. He became the first player in the club’s history to score in his first three matches.

Fans and players love the celebration” Sigh of relief” with Antony emulating the legend. According to some, it was a celebration to slam the doubters and some football pundits who didn’t believe in the 37-year-old.

A Benfica player has already imitated Cristiano Ronaldo’s new Man United celebration. Diego Moreira, who plays for Benfica, decided to replicate Ronaldo’s new celebration while scoring against Paris Saint-German in the U19 Youth league. The young player quickly exchanged passes with his teammate before firing a shot toward the goalkeeper, which rebounded back to him, and he scored before starting the celebration. All these prove the influence Ronaldo has all over the world.