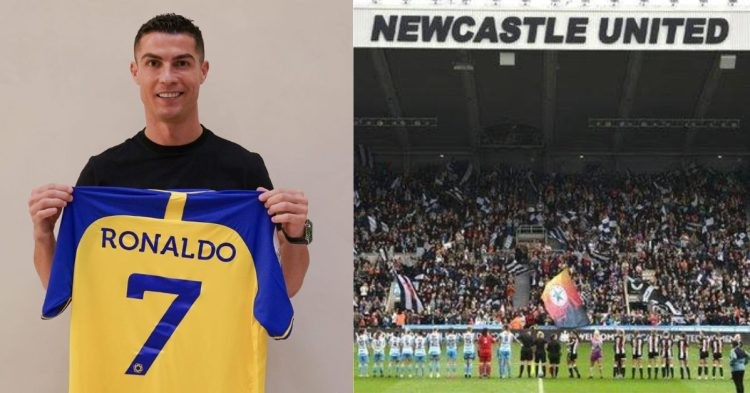 Cristiano Ronaldo has completed his move to the Saudi Arabian outfit Al-Nassr after a lot of speculations. The veteran’s latest move might look like his ambition to finish his career on a high note has come to an end. Although, there might be a glimmer of hope for the Portuguese to appear in his most desired Champions League campaign once more.

Ronaldo probably has had the toughest half-a-season so far in his unreal playing career. He returned to Manchester United in 2021 from Juventus. Everything looked glittery with the homecoming of Old Trafford’s prodigal son.

He had a fine first season, but things started going south from the start of the second season. Ronaldo reportedly wanted a move out of United after the Red Devils failed to qualify for the Champions League. However, the club was desperate to keep him.

New manager Erik ten Hag brought a positive outlook to the club but not to Cristiano. The manager and the star striker had a bad start. Ronaldo didn’t turn up for the pre-season matches and refused to come on as a very late substitute in a Premier League match against Spurs. A fit Anthony Martial was preferred ahead of him. Ronaldo finally took the ultimate shot at the club with an explosive interview with Piers Morgan. The result was a contract termination by the club.

“History in the making. This is a signing that will not only inspire our club to achieve even greater success but inspire our league, our nation and future generations, boys and girls to be the best version of themselves”. pic.twitter.com/XymHgtpMGD

A rotten World Cup campaign for the Portuguese didn’t help the free agent. His antics at his previous club and a sharp decline in his form made the big clubs step back in his pursuit. In the end, he accepted the biggest deal in soccer history and joined the Saudi Arabian giants, Al-Nassr in two and a half year deal.

Can Cristiano Ronaldo play in the Champions League for Newcastle United?

Cristiano Ronaldo is one of the greatest goalscorers of all time. Champions League is the most prestigious trophy in club football and the Portuguese have dominated it. He is the highest scorer in the competition with 140 goals in just 183 Champions League appearances. His eternal rival Lionel Messi is regularly playing in the competition for PSG and he is only 11 goals behind with 129.

Ronaldo’s move to Al-Nassr looked like his UCL dream is over. However, according to a previous report by MARCA, the Portuguese’s dream might just not be over. They said, has a clause in his contract that will allow him to move out on a loan deal to Newcastle next season if they qualify for the Champions League.

Newcastle was taken over by Saudi Arabian Public Investment Fund in 2021, and Ronaldo also completed a move to the country a few days ago. This middle-eastern link was the possibility for the 37-year-old.

Our information was Cristiano would sign and Cristiano signed by Al Nassr. No info about Newcastle in Cristiano’s contract. Cheers.

Newcastle has been in fantastic form since the takeover and the appointment of Eddie Howe. They are sitting in third place in the league after 18 matchdays. Their summer striker signing Alexander Isak is currently out with an injury. However, the young Swede forward will be fit by next June to play in the UCL and it looks like Howe won’t need any reinforcement from the Saudi Pro League.

The Initial reports from MARCA about the loan clause didn’t look very promising and realistic from the beginning. Now the Newcastle manager has come out with the truthfulness of the rumored clause.

Newcastle manager Eddie Howe denies any specific clause to sign Ronaldo in June: “We wish Cristiano all the best in his new chapter, but there's no truth in that from our perspective” 🚨⚪️⚫️ #NUFC

“It’s not true that we have that kind of clause”. pic.twitter.com/VhbPHot1YS

He said, “We wish Cristiano all the best in his new chapter, but there’s no truth in that from our perspective” via Mirror. Eddie Howe’s comments brought the truth out of the situation and things are clear now. However, his performances in Al-Nassr might just earn Cristiano Ronaldo a last dance to a Champions League-playing club in the near future. But, as things stand now, his path to UCL soccer looks extremely foggy.