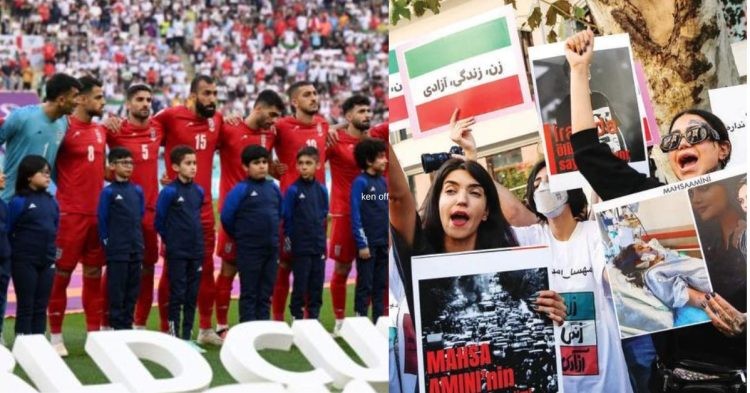 The Iran soccer team ahead of their match against England (left) Ongoing protests against the Tehran regime in Iran (right) (Source : Google)

@un @UNICEF please be our voice 🆘

We do not have security in Iran, and at any moment there is a possibility that the military of the Islamic Republic will attack and shoot us (ordinary people).#IranRevolution2022 #MahsaAmini#opiran https://t.co/29xwQTBKry

The IRGC has also prohibited the players to demonstrate any kind of political protest against the Tehran regime.

Why were the families of Iranian soccer players threatened?

The families of the Iranian soccer players were threatened by the IRGC as a response to the ongoing political protests against the Tehran regime. Mahsa Amini’s death, who was a student, started the protests in the country. Mahsa Amini was killed by the Iranian morality police for not abiding by the country’s dress code.

As per the sources, before the match against England, the Iranian players were promised “presents and cars”. However, after the match which saw the Iran players refusing to sing their national anthem, the regime switched to threatening the players and their families.

Several Iranian soccer players have been arrested after protesting against the regime. Former Iran international Voria Ghafouri was arrested last week. The 35-year-old right-back was arrested on the grounds of having “tarnished the reputation of the national team and spread propaganda against the state.”

Soccer world reacts as Iranian players are told to “behave”

Iran’s legendary player Ali Daei was threatened by the regime for backing the protests following Mahsa Amini’s death. Daei claimed that he declined the opportunity to attend the World Cup after having been invited by the organizers. Daei said that he wanted to be “with my compatriots and express sympathy with all those who have lost loved ones” instead of going to the World Cup.

Ali Daei further added, “I was taught humanity, honor, patriotism, and freedom… What do you want to achieve with such threats? ”

Voria Ghafouri’s former coach Andrea Stramaccioni said that he was shocked by Ghafouri’s arrest. The Italian coach said, “I am shocked, I spoke to some friends of mine in Teheran. Ghafour was arrested in front of his 10-year-old son and his wife who is very worried like all of us”. Stramaccioni also said, “These are difficult moments and I hope football can help in this situation. I hope this situation will be solved.”

Iran fans have continued to protest in the stadiums. The fans whistled while the Iran players sang the anthem during their match against the USA. Some fans even had the words “Women, Life, Freedom” on their t-shirts while some the words written on their bodies.