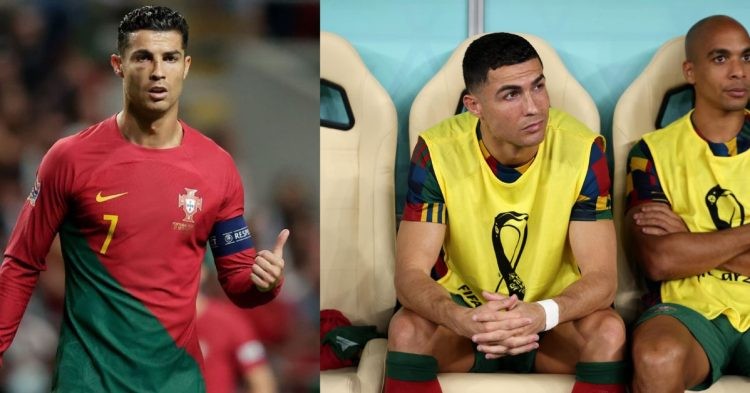 Cristiano Ronaldo starts the match against Switzerland on the bench for Portugal (Source: Twitter)

Cristiano Ronaldo has once again found himself embroiled in controversy during the ongoing FIFA World Cup 2022. According to reports, Cristiano Ronaldo has refused to train with the squad players of Portugal. Instead, the Portuguese skipper decided to join the starters for a recovery session in the gym. This incident took place after Portugal’s match against Switzerland, where Ronaldo started on the bench.

🚨 Cristiano Ronaldo did not train with Portugal’s squad players today and instead insisted on joining the starters for a gym recovery session.

With this game, Cristiano Ronaldo’s streak of starting 31 consecutive matches for Portugal in major international tournaments was broken.

Cristiano Ronaldo reportedly refused to join the squad players for training against coach Fernando Santos’s wishes. Ronaldo decided to skip training and join the starters for a recovery session, despite being in “perfect condition“, as per the sources.

It’s normal for players who played a match the previous night to skip training and have a recovery session instead. However, Ronaldo did not start against Switzerland last night and was only brought on in the 73rd minute.

This refusal might be Ronaldo’s way of reacting to the coach’s decision to not start the Portuguese skipper. Although the decision was shocking, Fernando Santos was ultimately proved right. Goncalo Ramos, the young Benfica forward was chosen by Santos to start instead of Ronaldo. The 21-year-old striker from Benfica scored a hat trick in his first start for Portugal, helping his side romp to an emphatic 6-1 victory against Switzerland.

Although the former Manchester United star has not officially commented on the incident, Fernando Santos spoke to the media to clear out the speculations. The Portuguese coach clarified, “Cristiano has shown that he is a professional of choice and a captain of a handful. He didn’t create any problem, really. We spoke before the game and he had no issue with my decision. Cristiano’s an example.”

However, Cristiano Ronaldo’s sister and his girlfriend have had some strong words regarding this incident. Ronaldo’s girlfriend, Georgina Rodriguez, lashed out at coach Fernando Santos for his decision to exclude Ronaldo from the starting XI.

She said, “Congratulations Portugal. While the 11 players sang the anthem, all eyes were on you. What a shame not to have been able to enjoy the best player in the world for 90 minutes.”

Ronaldo’s sister, Elma Aveiro, also criticized the Portuguese coach. She wrote on Instagram that the coach had “humiliated” her brother. She wrote, “I don’t know why and I don’t understand it, but I’m sure we’ll have the answers from God later.”

Soccer world reacts to Ronaldo not training with Portugal’s squad

Cristiano Ronaldo’s recent incident has not gone down well with the fans. Fans have taken to social media to express their chagrin regarding this incident. One fan complained, “He is such a massive diva. Dude is not, and never has been, a team player. If he’s not in the spotlight then he just pouts. Why tf would he need a recovery session today? He didn’t play yesterday.”

Another fan said, “He’s still upset about being dropped, that’s why he’s throwing tantrum by not training with the squad.”

Here’s a look at some more reactions and memes from the fans on this incident.

That’s where he is pic.twitter.com/IKLvX25VPx

Penaldo fans have arrrived in the comment section to protect him pic.twitter.com/0Z40zDTzqd

It’s sad how childish he became at the end of his career, completely ruined his professional reputation for what?

Why is causing so many problems for his national team.?
He is acting like an insecure clown

It will be interesting to see if Ronaldo starts for Portugal against Morocco in their quarter-final clash in the FIFA World Cup 2022. It will be a huge decision for Fernando Santos to whether start the experienced Cristiano Ronaldo or to start Goncalo Ramos, the man of the match against Switzerland.