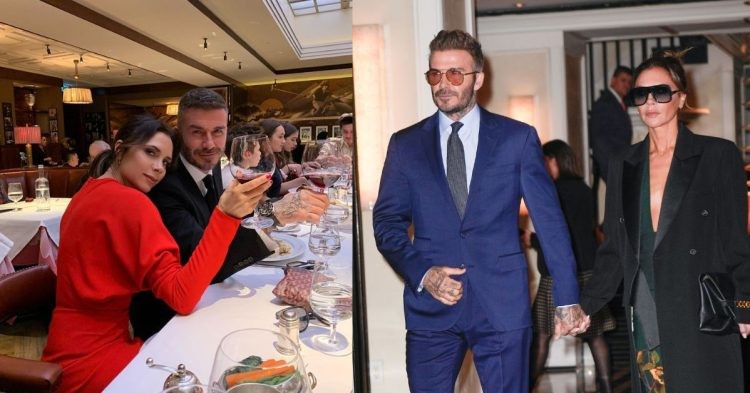 David Beckham and Victoria Beckham have shared only one meal during their entire marriage. (Credits: Twitter)

Former soccer player David Beckham has revealed an intriguing secret about his wife, Victoria Beckham. David has said that Victoria has never changed her diet in the past 25 years. In their marriage of around 24 years, David and Victoria have shared only one meal together. David described that solo incident as ‘the most amazing thing,’ reports Mirror.

Former Spice Girl, Victoria, previously won admiration when she claimed that the idea of women wanting to be thin was “outdated” and “old-fashioned”. She made these comments when she launched a new shapewear collection, which according to her, looked particularly good on curvier bodies.

Victoria said: “It’s an old-fashioned attitude, wanting to be really thin. I think women today want to look healthy and curvy. They want to have some b**bs – and a bum.”

Pop singer and fashion designer Victoria Beckham says wanting to be very thin is out of style and being healthy and curvy is in https://t.co/u3Uj5moXnO pic.twitter.com/TJB5Iskdon

However, much to David’s dismay, he admitted that Victoria had “eaten the same thing for the last 25 years.”

The couple got married in 1999, two years after they started dating. Victoria, famously known as “Posh Spice”, and David were two of the most famous and successful people in their fields at that time.

David and Victoria Beckham have four children including three sons Brooklyn Joseph, Romeo James, and Cruz David, and one daughter Harper Seven. Brooklyn was born on March 4, 1999, and Romeo was born on September 1, 2002. Elton John is the godfather of both the elder sons. Cruz was born on February 20, 2005, and Harper was born on July 10, 2011.

What forced Victoria Beckham to break her strict diet?

David and Victoria are the power couple who share four children and a lavish lifestyle, but not their meals.

“I get quite emotional about food and wine. When I’m eating something great I want everyone to try it,” David explained on the River Cafe Table 4 podcast.

“Unfortunately, I’m married to someone who has eaten the same thing for the last 25 years. Since I’ve met Victoria, she only eats grilled fish, and steamed vegetables. She’ll very rarely deviate away from there.”

🚨 David Beckham has claimed that his wife Victoria has eaten the same meal every day for the past 25 years.

The former Manchester United player then went on to recall the one-time Victoria broke her diet. She relaxed her usual diet and ate from her husband’s plate.

“The only time she’s shared something that’s been on my plate is when she was pregnant with Harper, and it was the most amazing thing,” David remembered. “It was one of my favorite evenings. I can’t remember what it was, but I know she’s not eaten it since.”

This is how 48-year-old Victoria has maintained herself. She has had a constant diet for the past 25 years and broke it only once while pregnant with her fourth child.