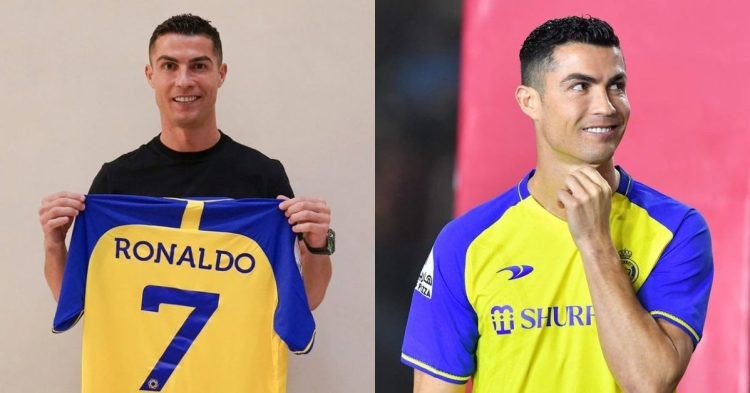 Cristiano Ronaldo joined Saudi Arabian club Al-Nassr after signing a bumper contract worth over $200 million. The whole soccer world was talking about the deal as Ronaldo’s fame knows no bounds. But will his fame help him break the record for most jerseys sold again? The Portuguese himself has stated that records follow him, so he might just do it again.

During the controversial interview with Piers Morgan, Ronaldo was inquired about his shirt sale record. Morgan said, “You broke the all-time record for shirt sales in 24 hours… you actually beat a guy called Messi at PSG, you must have been happy about that?”

Ronaldo and Morgan laughed and the Portuguese replied: “Of course, I am happy [laughs].

“As you know, I do not follow the records, the records follow me. Another one in my book.”

An extraordinary statistic that has already confirmed his huge fame is the increase in followers for Al-Nassr. Before Ronaldo’s announcement, Al-Nassr had 860,000 followers on Instagram. Five days after announcing the signing of the 37-year-old, Al-Nassr’s Instagram account has 9 million followers at the time of writing this.

In the wake of Ronaldo’s announcement on Friday night, Al-Nassr fans flocked to the club’s megastore in Riyadh. The jersey, which costs around $80 is expected to sell with heavy traffic in the next few days.

Cristiano Ronaldo’s second arrival at Old Trafford was greeted with a frenzy. Manchester United’s tweet announcing the arrival of the Portuguese became the most liked tweet ever. The fans also helped him to create the record of selling the most shirts in 24 hours.

🚨ANOTHER RECORD FOR CRISTIANO RONALDO🚨

Why did Ronaldo leave Manchester United?

It all comes back to the controversial interview Ronaldo gave to Piers Morgan. Ronaldo had lashed out at how the club was being run. He talked about many things during the interview that he felt were major issues.

He explained how things had not changed from the last time he was around a decade ago. The Portuguese was baffled by the club’s decision to appoint Ralf Rangnick as manager. Rangnick led United to their worst-ever performance in the Premier League. He said he felt “betrayed” by the club and has “no respect” for manager Erik ten Hag.

Following the release of the interview, a club statement was released. It read, “Cristiano Ronaldo is to leave Manchester United by mutual agreement, with immediate effect.”

“The club thanks him for his immense contribution across two spells at Old Trafford, scoring 145 goals in 346 appearances and wishes him and his family well for the future.”

“The club thanks him for his immense contribution across two spells at Old Trafford”, statement confirms. pic.twitter.com/wpkHJLVVpu

“Everyone at Manchester United remains focused on continuing the team’s progress under Erik ten Hag and working together to deliver success on the pitch.” Issuing his own statement on the matter, Ronaldo said: “Following conversations with Manchester United we have mutually agreed to end our contract early.

“I love Manchester United and I love the fans, that will never ever change. However, it feels like the right time for me to seek a new challenge.

“I wish the team every success for the remainder of the season and for the future.”

After being a free agent for a while, Ronaldo took up the Saudi side Al-Nassr’s offer. He will now feature in the Saudi Pro League.