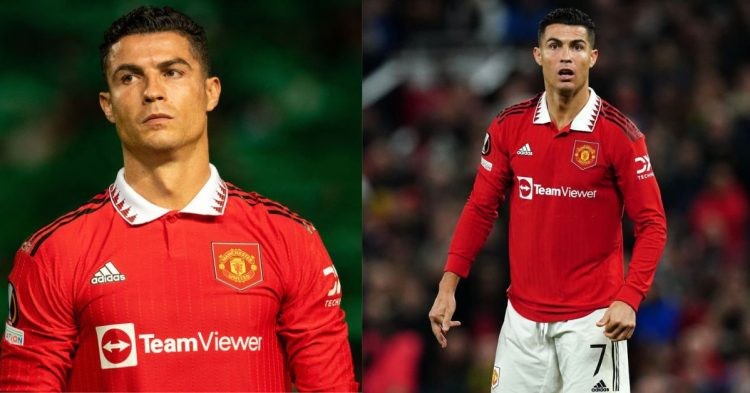 Cristiano Ronaldo started his first league game for Manchester United since August. He was substituted in the 72nd minute of the game and was visibly disappointed with the decision of his boss, Erik Ten Hag.

However, Ten Hag explained that he wants his strikers fresh for the upcoming fixtures. Ten Hag wants to make sure that the Portuguese striker is available for the upcoming games against Tottenham Hotspur and Chelsea.

Manchester United drew 0-0 at home against Newcastle United after managing just two shots on target. Nick Pope, fairly, was not tested the whole match and had a quiet game at Old Trafford.

Everything was going well, normally and at its pace, when suddenly Old Trafford erupted into some abysmal decisions by the referee.

Cristiano Ronaldo was robbed of his two goals by the officials in the game against Newcastle United. It looked like Fabian Schar had rolled a free-kick to Nick Pope.

Pope then went on to take the kick himself, but Ronaldo, seeing the touch and believing the ball was already in play, squeezed in before rolling the ball into an empty net.

Manchester United’s goal scorer and all the players were adamant enough that Ronaldo was well within the chance to grab the ball, arguing the play had already commenced.

Meanwhile, in the 48th minute of the game, Ronaldo’s goal was ruled out for offside. Anthony played a beautiful pass into the feet of Ronaldo. The striker put the ball in the net, but by the officials’ decision, he was offside.

All the Manchester United players and Ten Hag himself were involved in a heated discussion with referee Craig Pawson after the final whistle. Ten Hag slammed the officials’ decision that Pawson was very wrong.

Further, he added, “Our strikers will score, will score a lot, I’m confident about that, as long as we keep doing the work in and out of possession.”

In the second half, the Magpies couldn’t play as high on the pitch as they did in the first half of the game. Eddie admitted he was satisfied with a point at Old Trafford.

He said, “Especially in the first half, I thought we were very good.” “Joelinton had the two chances when he hit the woodwork. Further, we could potentially have had a penalty for the challenge on Callum Wilson.”

Furthermore, he added, “I could see it at the time, and for me it was clear Fabi wasn’t taking the kick. He was allowing Nick to do it.

Fans react all over the world on the bizarre incident

Football fans all over the world took to social media to show their rage as United were robbed of their goal.

The first one said, “The refs once again show they hate Ronaldo with all their forces. How’s that goal disallowed? The play was on.”

Another said, “Shades of Nani vs Tottenham there. Ronaldo scores after Newcastle looked to have taken a quick free-kick. The goal is disallowed and Ronaldo is booked for his protest.”

Robbed of a clear penalty, and denied a clear goal, this agenda against Cristiano Ronaldo isn’t funny anymore. pic.twitter.com/LIouhhPqoY

A third added, “I saw Ronaldo score 2 goals, both disallowed. Both appear to have been standing. This league is rigged.”

And the last one concluded, “The ref was so arrogant in his decision making, you’d think he was right, but he clearly wasn’t. The worst decision of the lot was the disallowed Ronaldo goal. That was absolutely shocking.”

Manchester United welcome Antonio Conte’s Tottenham Hotspur for the next fixture. With a  following trip to Stamford Bridge for a Premier League match against Chelsea.