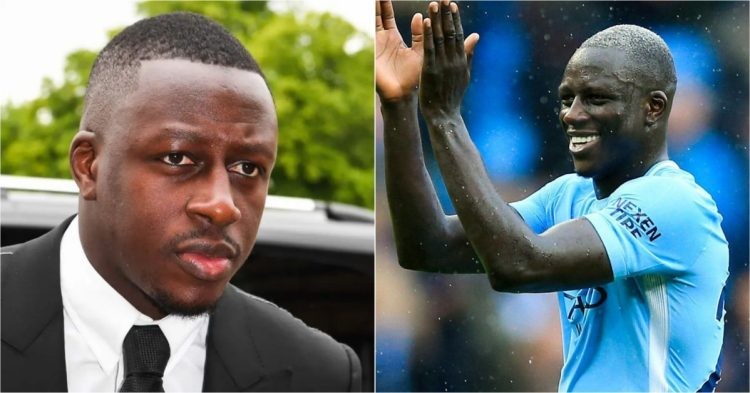 Benjamin Mendy has a huge win in court. (Credit: Twitter)

Manchester City and French international Benjamin Mendy just got some good news. The 28-year-old was charged with multiple counts of sexual assault in 2021. The soccer star was arrested in August 2021. However, almost one and a half years later, his trial ended and it turned out to be in his favor.

According to a report from Sky Sports, Benjamin Mendy has been cleared of six counts of the charges against him. Following his 2021 arrest, Mendy was in prison for almost a year before he could see his day in court. But the trial itself was also a long one which began in August 2022 and ended in January 2023. The Chester Crown court, however, did not come to conclusions about two more charges.

There is one count of r*pe against a 24-year-old woman in 2020, and another count of attempted r*pe against a 19-year-old in 2018. Mendy will enter a retrial on both of these counts later in 2023. So it remains to be seen what happens next as it is a developing matter. It is also important to note that Louis Saha Matturie, Mendy’s friend, also had three counts dropped against him.

Benjamin Mendy was a great addition to the Manchester City team since signing in 2017. He signed a six-year contract with the blue side of the Manchester clubs. Mendy was also a part of the French World Cup-winning side in 2018. However, City management suspended him in September 2021 after the reports of the allegations came out.

Mendy was reportedly on around $122,000 per week. But, the soccer club stopped paying his wages right after the suspension. So fans may want to know how Man City reacted to the latest developments. In a statement, the club refused to make any concrete decisions as there are still legal procedures that need to be completed. Mendy’s contract is set to expire in the summer of 2023.

At present, it appears that Mendy will walk away as a free agent later this year. While it is certainly great news for Benjamin Mendy personally, fans are not so happy about the news. On Twitter, fans are doubtful about the fairness of the trial and they have voiced an immense amount of displeasure. But, there is also a section of fans who are happy for Mendy. So the reactions are quite polarizing.

Here are some fan reactions to Mendy’s latest court verdict

Twitter police sentenced him to life in prison as he was guilty until proven innocent https://t.co/21VFNCx5wt

The system is broken. Gotta side eye those who’s instant reaction to every case is “why you bringing this to social media & instead of the police” https://t.co/EvTMg3geqd

This is exactly why innocent until proven guilty is so important. I really hope the women who accused Benjamin Mendy get as much prison time as he would have had if he was found guilty. https://t.co/KtTAjaiHU4

I know there is still a retrial, but this is why you follow “innocent until proven guilty” no matter what the circumstances are https://t.co/nn7MLeikmR

Not guilty does not mean the same as innocent btw https://t.co/FppZommclW

Despite all the outrage, this is not the first time when Benjamin Mendy won a court battle. In September 2022, the court found Mendy not guilty of r*pe charges against a 19-year-old. With six more counts being dropped against him, it will be interesting to see how the soccer world reacts to his possible return to the field.