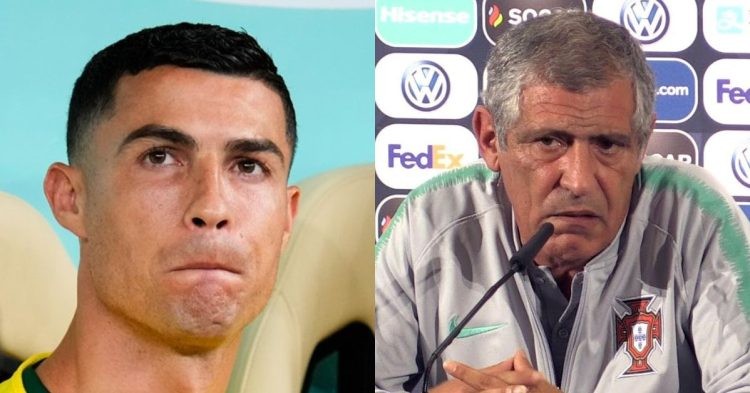 Portugal demolished Switzerland in their round of 16 match. A Goncalo Ramos hattrick and goals from Pepe, Raphael Guerreiro, and Rafael Leao saw Portugal win 6-1. Cristiano Ronaldo came on as a substitute in the 73rd minute. His place in the starting eleven came under doubt because his replacement scored a hat trick. Following this, concerning reports regarding Ronaldo at the World Cup emerged.

He was close to joining PSG during the summer, always been in the list — now his price will be way higher. pic.twitter.com/qqT4a4S4kY

Ronaldo has been the captain of the Portuguese side for quite some time now. He even led them to the Euros championship. He has been a role model, both on and off the pitch for his teammates and fans. But this season has been the toughest Ronaldo has ever had to face. He needs to be careful of his actions to safeguard the legacy he will leave behind.

Did Cristiano Ronaldo threaten to leave Portugal’s squad before playing against Switzerland?

A report by Football Espana said Ronaldo had threatened to leave Portugal’s squad ahead of the clash against Switzerland. This was when he realized that manager Fernando Santos had benched him for the match. Santos had reportedly explained to Ronaldo the tactical nature of his decision. Ronaldo was not impressed with Santos and was on the verge of leaving the squad in Qatar.

But Ronaldo later decided not to do so. He felt the negative impact of his departure from the squad would hamper Portugal’s World Cup charge. The report has since been refuted by the Portuguese FA. Ronaldo’s greatness is undoubted and his records are unparalleled by anyone bar Messi. But his actions of late have lacked the professionalism we have seen throughout his career.

“Every day Ronaldo builds a unique story at the service of the national team and the country which must be respected and which attests to the indisputable degree of commitment to the national team. Incidentally, the degree of dedication of the player most capped by Portugal was again demonstrated if necessary in the victory against Switzerland, in the round of 16 of the 2022 World Cup,” they said.

The fact that such a lengthy statement had to be released to refute the report is a bit worrying for Portuguese fans. A response does not necessarily mean that parts of the story were true, but it cannot be ruled out completely either.