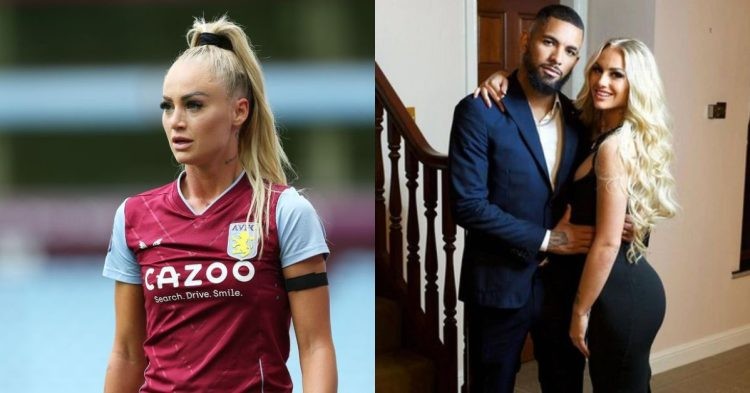 Alisha Lehmann and Douglas Luiz (Credits: The Mirror and MARCA)

Douglas Luiz has already had a rocky start to the season on the pitch. He has played 14 games for Aston Villa this season, which means he has not had a lack of chances. Luiz was set to be part of Manchester City‘s squad but the transfer fell through because of work visa problems. Arsenal had also approached Aston Villa for his signature.

In an Instagram post, Alisha Lehmann penned a heartfelt message to her reported ex-boyfriend Douglas Luiz. The Swiss footballer has been at Aston Villa since 2021, scoring just three goals in 28 appearances. Her most prolific season was when she was in Switzerland, scoring 25 goals in 52 appearances. She has scored 7 goals in 34 appearances.

On her Instagram, Lehmann wrote, “If it’s not the right time, there will be another time❤️🙏🏼.” Fans have speculated this to be a message to Luiz. Lehmann has 9.3 million followers on Instagram. She is one of the most followed female football players on the planet.

Why did Alisha and Douglas Luiz break up?

According to various reports, Lehmann broke up with Luiz as the latter was “uncomfortable with Lehmann’s ‘sexy side'”. Lehmann had participated in a photo shoot for a calendar which Luiz did not like.

A source said, “They were so loved up, But, sadly, as Alisha became more in demand off the pitch. The cracks started to appear in their relationship. When asked to do a calendar, she jumped at the chance to show off her sexy side but he was not happy.”

To get your calendar 2023, link is in my bio ✨ pic.twitter.com/pQu8xFDJaX

“He didn’t think it was something she should be doing. They rowed a lot and in the end, Alisha simply had enough.” Luiz’s services on the pitch have been in high demand, especially since Arsenal offered $42 million to Aston Villa for the Brazilian. Villa blocking his move and the current situation in his personal life may be the reason for Luiz’s poor performances this season.