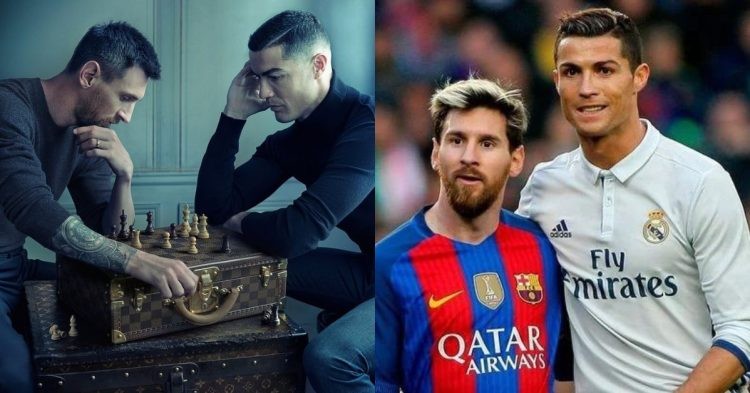 Lionel Messi and Cristiano Ronaldo were seen together in a photograph playing chess that went viral. This World Cup could well be the last time we see the two greatest-ever players play in the same international tournament. But in a new video released, it has been revealed that the image was photoshopped.

A behind-the-scenes video released by Louis Vuitton of the iconic viral picture has led some fans to speculate that they were not in the same room. Fans believe the image was photoshopped. Both Messi and Ronaldo spoke on the history of Louis Vuitton in big tournaments in football.

Behind the scenes of the Ronaldo and Messi Louis Vuitton picture advrrt.pic.twitter.com/nv4ErtRmSR

He also indicated they could have dinner and become ‘friends’ in the future.

Fans go into meltdown as the photoshoot video gets released

Fans were very excited to see Messi and Ronaldo in the same picture and went into a frenzy when the video was released by Louis Vuitton.

They weren’t even in the same room. Ronaldo is afraid of him 😭😭😭

Messi and Ronaldo’s fans were very disappointed that the image might have been photoshopped.

the Pic of ronaldo n messi is photoshopped, I hate 2022

Some other fans believe the photo was real, and that Messi and Ronaldo were in the same room.

Some people desperately hope and pray that the Messi and Ronaldo ad for Louis Vuitton was not not real,

So to make themselves believe, they start carrying fake news that it was photoshopped.

A photo, on the other hand, shows that the photo was edited.

The Messi and Ronaldo picture was edited, they werent really sitting infront of each others 👀 pic.twitter.com/WjeNWEFL2r

The World Cup begins tonight with Ecuador taking on Qatar. England takes on Iran in their first match of the season, after which the USA will take on Wales in a much-awaited encounter.