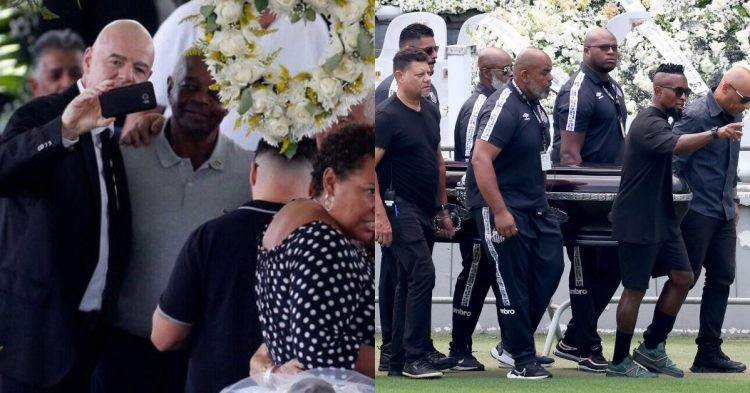 As the world mourned the loss of arguably the greatest soccer star of all time, it was Gianni Infantino who grabbed headlines for his disrespectful act. Pele, widely regarded as the greatest sporting icon of the 20th century tragically passed away on December 29, 2022. The Brazilian soccer legend lost a long and hard-fought battle with cancer last Thursday.

To honor O Rei, Santos FC, the club for whom Pele appeared in over 600 games, organized the legend’s funeral. The funeral was held at Santos’s home ground, the Vila Belmiro. In attendance were high-profile figures from the soccer world, including FIFA President Gianni Infantino. As Brazil paid final respects to its former Sports Minister and soccer legend, Infantino was widely condemned for his actions at the ceremony.

Thousands have gathered at Santos’ stadium, Estádio Urbano Caldeira, to pay respect to O Rei himself, Pelé, on the first day of his funeral. 😢🇧🇷 pic.twitter.com/rgRCUibmqP

The FIFA President was pictured taking a selfie at Pele’s funeral. Social media users went ballistic at the disrespectful sight. Gianni Infantino indulged in a selfie session right next to the 82-year-old’s casket. The President also made headlines for planning to forward an official request to every country to name a stadium after the three-time World Cup winner.

Infantino’s picture has gone viral, warranting angry reactions from fans all around the globe. Twitter, Instagram, and other social media users have spared no expense in throwing criticism and ridicule toward the FIFA chief.

After reading the news, one fan wrote “Today I feel dead.” This comment amply displayed the mood of soccer fans all around the globe who had more-or-less similar feelings at the sight. Most of the users commented on Daily Mail‘s Twitter post after the media house shared the news of Infantino’s selfie.

This makes Infantino a scumbag

Why is he still FIFA boss?

The feelings of shock were soon replaced by anger among fans. Comments like “Such a disrespect,” and “Decorum is finished,” were spotted on Twitter. Another fan made sure to voice his concerns differently altogether by saying: “This makes Infantino a scumbag.” Other angry reactions featured comments such as “Why is he still FIFA boss?” and “He’s an idiot.” One user even wrote, “The man has no good qualities.”

Since the backlash, Gianni Infantino has come out to publicly state that he feels dismayed to have been criticized for the selfie. He also attempted to explain by stating that he had been asked by Pele’s family members to do so. This is the biggest such incident of Infantino receiving backlash since his “I feel Gay” comment earlier in 2022.