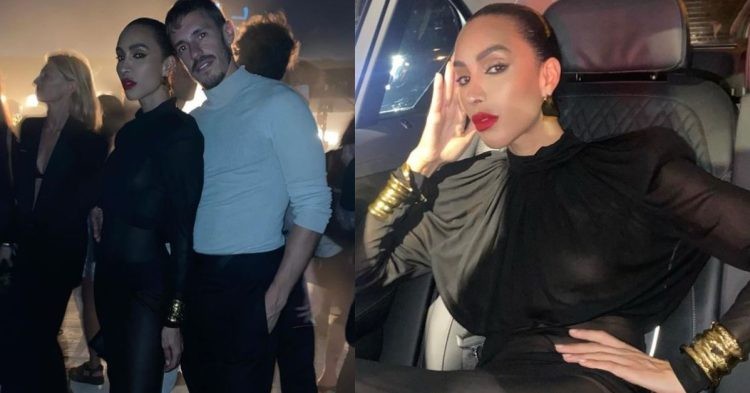 32-year-old French supermodel Ines Rau recently posted a picture of herself on Instagram that fueled hateful comments from people. Rau recently attended a party hosted by Yves Saint Laurent in Miami, Florida. The party was attended by high-profile celebrities including Madonna. After the party, the Frenchwoman took to Instagram to share the happenings of the evening on social media.

The contents of Ines Rau’s Instagram post included a picture of her smoking with British fashion model Adwoa Aboah. The next picture was that of Madonna jamming to American DJ, Honey Dijon. Next in the sequence, was a picture of Ines Rau posing with Italian artist Giovanni Leonardo Bassan, followed by another one with both Giovanni, and Adwoa.

Lastly, Rau posted a video of herself in the same sequence. This video captured the 32-year-old sporting her see-through black dress which was complimented by her sunglasses and her red lipstick. In the video, Rau can be seen dancing whilst enjoying a cigarette.

Rau was later condemned for putting up the post by some sections of social media users. Kylian Mbappe’s rumored girlfriend, therefore, yet again found herself being targeted online. Ines Rau was rumored to have dated the PSG forward for a while. However, their rumored relationship allegedly ended after Mbappe was subsequently rumored to be with Stephanie Rose Bertram instead.

Belgian model Rose Bertram was also captured in Qatar, cheering on France in their bid to retain the World Cup. Read about Stephanie Rose Bertram here.

While the first few pictures in the post had been given the black-and-white effect, the ones toward the end had been left untouched, that is, they had not been edited. In the unedited pictures, it was clearly visible that the French model had chosen to show off her see-through dress.

It later turned out that Ines Rau’s post was being targeted by transphobic comments from some sections of Instagram users. While most of the comments were focused toward genuinely celebrating the French model, some negative comments stood out.

“Is Mbappe really with this old man?” This is the comment from a user who aimed to demean Ines Rau. Another user while taking an incredibly cheap shot at the transgender model, wrote: “Bro imagine being Mbappe, losing the World Cup and coming back home to a completely flat guy claiming to be a women.” “Be a Man you are man,” wrote another, who couldn’t accept that Ines Rau was no longer a man.

Fortunately, the positive comments on Ines Rau’s post far outweighed the attempts to tarnish her name on Instagram. Even though most people now clearly see and accept transgenders’ abilities to make it big, it remains such that some “keyboard warriors” still possess the transphobic mentality.