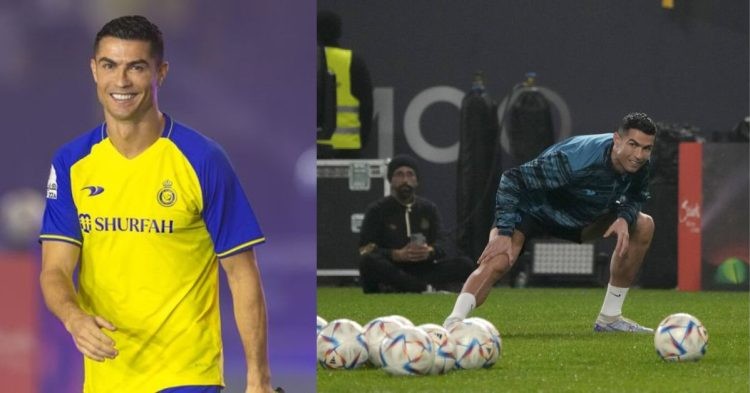 Cristiano Ronaldo has already impressed his fans at his new club. Ronaldo recently moved to Al-Nassr, after weeks of speculation. Although Ronaldo hasn’t played a game yet for his new club, he participated in an open training session. The Portuguese legend did some shooting drills with his new Al-Nassr teammate Anderson Talisca. Ronaldo scored a few goals, which brought on huge cheers from the fans inside the Mrsool Park stadium.

As soon as Ronaldo was unveiled by Al-Nassr in front of 25,000 raucous fans in Mrsool Park, he immediately took part in his first training session for his new club. Ronaldo was seen doing shooting drills with Al-Nassr’s midfielder and former Benfica star, Anderson Talisca. Although Talisca managed to sky his shot over the bar, it was not the same case for Ronaldo.

The ex-Manchester United star received the ball with his left foot and hit a thumping finish into the net, giving the goalkeeper no chance of saving it. The video proves that although he is on the wrong side of 30, Ronaldo’s finishing skills are still lethal. Ronaldo’s skills and goals during the training session have sent the Al-Nassr fans into a frenzy. Fans have flooded social media platforms with snippets from Ronaldo’s training session.

Here’s how fans have reacted to it.

BEtter than current PL players..just not mentally..I hope he comes back and shut all the haters..

That’s his “weak” foot as well. Incredible. Most complete player ever! 🐐 seems happy too!

Messi can’t shoot like that with his weak foot

Cristiano Ronaldo will probably be the biggest name in the world of soccer to play for Al-Nassr to date, and to watch him in action must be a treat for any soccer fan. The date of Ronaldo’s official debut for Al-Nassr, however, is still not clear.

When will Cristiano Ronaldo play his first game for Al-Nassr?

It was widely expected that Cristiano Ronaldo would play his first game for Al-Nassr today against Al-Tai.  According to reports from Khaleej Times, however, Ronaldo has been hit with a two-game ban. The ban is from Ronaldo’s time at Manchester United. After Manchester United lost 1-0 to Everton in April last year, Ronaldo was found guilty of smashing a phone from the hands of a teenage fan.

Cristiano Ronaldo to miss Al Nassr today
Ronaldo will have to wait a while to make his Al Nassr debut as he must serve the two-match ban handed down by the English FA on 17 Nov. over a clash with an Everton fan in 2022.#FIFA #cristiano #ronaldo #alnassr #debut #ilotngofficial pic.twitter.com/KbXmXz5XPq

Ronaldo was handed a fine of $60,000 and was suspended for two matches. Since Ronaldo’s contract at Manchester United was mutually terminated by the club, however, he could not serve the ban. Therefore, according to the rules, the ban would come into effect when Ronaldo joined a new club. Thus, Ronaldo has to sit out the matches against Al-Tai and Al-Shabab.

Al-Nassr fans would probably get to see their new superstar play his first official match on January 22, against Ettifaq. After scoring a multitude of goals for clubs like Manchester United, Real Madrid, and Juventus, it’s time for Cristiano Ronaldo to score goals and win titles for his new club, Al-Nassr FC.