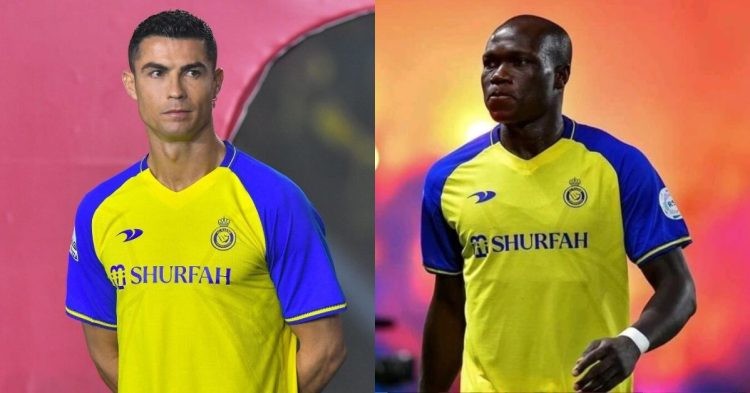 Cristiano Ronaldo did not feature for Al-Nassr in their first game after signing him. It is likely he is fulfilling the two-game ban given to him by the English FA. On the other hand, a different rule that could prevent him from being registered as an Al-Nassr player is the rule allowing only eight foreign players. For him to be registered, a non-Saudi Arabian Al-Nassr player will have to leave the club.

🚨 Al-Nassr have just terminated Vincent Aboubakar’s contract so that they can clear the way for Cristiano Ronaldo.

It is speculated that Vincent Aboubakar is the player being sacrificed for Ronaldo. According to a report by RMC Sport, “The 30-year-old striker had his contract terminated by the Saudi club to comply with the maximum number of eight foreign players set by the Saudi federation.”

There is no official confirmation of these proceedings. Al-Nassr has made no comments. There are, however, further rumors of Aboubakar being linked to Ronaldo’s former team. It is being reported that Manchester United is looking for a loan move for a striker and Aboubakar fits the bill for Erik ten Hag. However, according to The Athletic, United is already in talks with Burnley to acquire the services of Wout Weghorst on loan.

Cristiano Ronaldo and Al-Nassr run into their first hurdle

Al-Nassr announced the signing of Ronaldo at the end of last year. Their first match following the blockbuster signing was against Al Ta’ee on Thursday, January, 5. The match, however, was postponed by 24 hours. But Ronaldo’s debut was in doubt anyhow.

According to a source of the Times of India, “Al Nassr has not registered him [Ronaldo] yet because there is no vacancy for a foreign player. A foreign player must leave to register Ronaldo, either by selling or by terminating the contract by mutual consent. There are ongoing negotiations to sell one of the players, but they have not reached their final stages yet.”

It was speculated that Uzbek midfielder Jaloliddin Masharipov will be the one to make way. But according to the latest reports, Aboubakar looks on his way out. He was also caught in an altercation with Brazilian player Talisca in the dressing room. They were separated from each other by their teammates. The Cameroonian’s days at the Saudi club look limited but nothing is official.

Ronaldo, on the other hand, even after being registered will not be able to feature in Al-Nassr’s next game. The English FA has suspended him for two games after he was found guilty of slamming a cell phone out of a boy’s hand after United’s frustrating loss to Everton. Ronaldo was also cautioned by the police for his actions. The suspension of the English FA is active in Saudi Arabia due to FIFA rules.