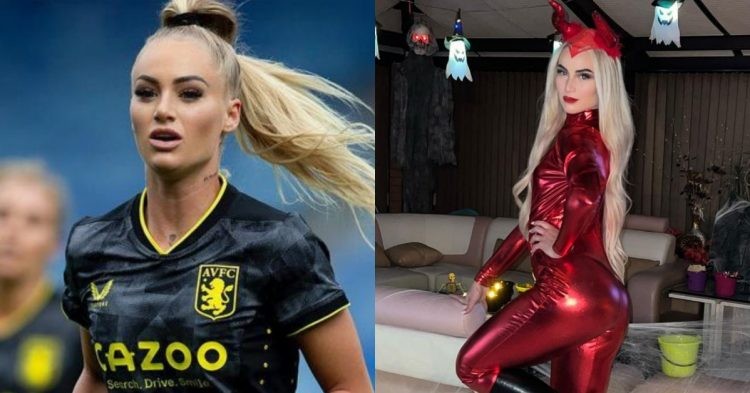 Alisha Lehmann steals the hearts of soccer fans from all over the world, yet again! As the Halloween week kicks off, people are showing off their costumes for the annual festivities. Alisha just posted pictures of her costume; as always, she looked drop-dead gorgeous!

The Swiss beauty was wearing a red devil costume and she was posing on top of her couch. Fans are always mesmerized by her stunning looks and her latest pictures have certainly lived upto the fans’ lofty expectations. Lehmann is also seemingly enjoying the occasion as the fans can see Halloween decorations in her background.

As for her professional career, Alisha Lehmann plays for the English soccer club Aston Villa. In the ongoing season, Lehmann has played 4 matches for her club side with 1 goal and 1 assist. The forward has played 304 minutes on the pitch and has seen one yellow card for her troubles.

Her Women’s Super League career started at the age of 19 when she made her debut for West Ham. She was a West Ham player for three seasons before moving on to Everton for the 2020-21 season. However, Alisha played only one season for the Merseyside team before joining Aston Villa for the 2021-22 season. In total, she has scored 14 goals and registered 9 assists throughout her six seasons in the league.

Alisha Lehmann sets the internet ablaze with her Halloween costume

Alisha Lehmann has a big fan following on her Instagram account. The 23-year-old soccer player has over 8.8 million followers on the social media site. Recently, after scoring her first goal of the season, Lehmann’s celebration went viral for all the wrong reasons. It also angered her real-life boyfriend Douglas Luiz. Luiz is also a professional soccer player who plays for the same club as her.

Regardless of how protective her boyfriend is about her, the fans could not stop praising her for the costume. While some commented on her insanely good looks, others called her boyfriend a lucky man!

An Instagram user by the username of @lustfloss wrote, “Douglas is feasting tonight.” Another user @jf_mvcedv worshipped her beauty as they wrote, “Hail Alisha.” Sending love to Alisha, user @baiaofabio wrote, “you can’t help but love this little devil.” Another English soccer juggernaut Manchester United‘s mascot is a red devil and seeing her costume, user @gabrieldcampos help but write, “Come to Manchester United.”

What did you think of Alisha Lehmann and her Halloween costume? Let us know in the comments down below.