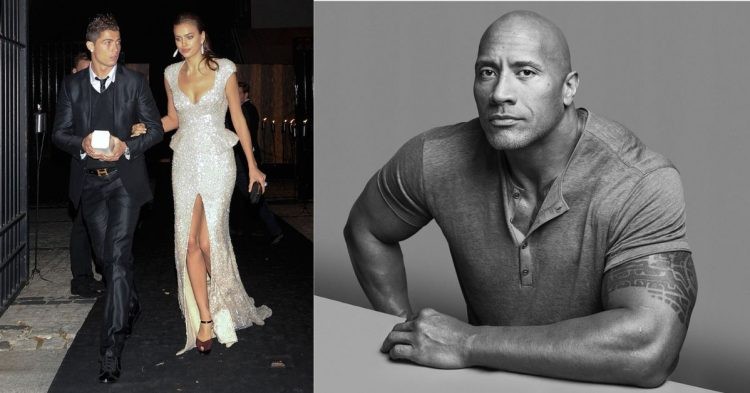 Cristiano Ronaldo is one of the biggest personalities in the world of soccer. Anything that Ronaldo does, whether on or off the pitch, always makes the headlines. Ronaldo’s dating life, especially, has always captured the front pages of the newspapers.

The same happened when Ronaldo used to date Russian model Irina Shayk. Recently, an interview of Irina Shayk resurfaced on the Internet, which suggests that the Portuguese soccer star was apparently jealous of Dwayne Johnson.

In the interview, Irina Shayk talks about her first film, Hercules, where she played the role of Hercules’ wife. The character of Hercules was played by none other than Dwayne ‘The Rock’ Johnson. The former wrestler-turned-actor is one of the most popular celebrities in Hollywood. The interviewer asked Irina about her experience of making her acting debut alongside such a big star like Dwayne.

Irina had only good things to talk about Dwayne. She said, “He’s an amazing actor. He’s so funny, very nice. To be the first time on the big screen next to Hercules, next to Dwayne, was really a big honor for me,” The interviewer then went on to ask Irina whether her boyfriend, Cristiano Ronaldo, was a little bit jealous of her acting next to Dwayne Johnson.

Irina, however, did not directly answer the question. Instead, she said, “I don’t know, you should ask him.” Irina continued, “If I take some business decisions for myself if I want to do something, I don’t ask no one what they think about it. It’s your career, your life, you have to be independent.“. Shayk explicitly mentioned that she does not ask anyone about their opinions on her career choices.

The rumors started to emerge when Irina Shayk was still dating former Real Madrid soccer star, Cristiano Ronaldo. However, the rumors turned out to be false, since neither Dwayne nor Irina ever confirmed these rumors.

Irina Shayk and Cristiano Ronaldo were in a relationship for five years. The pair met each other in 2010 during a shoot for an Armani Exchange advertisement. The couple called it quits in 2015.

After their separation, Ronaldo started dating his current girlfriend, Georgina Rodriguez, while Irina started dating Hollywood star, Bradley Cooper. Irina and Bradley, however, separated from each other in 2019. Currently, according to reports from TMZ, Irina Shayk is dating American rapper, Kanye West.