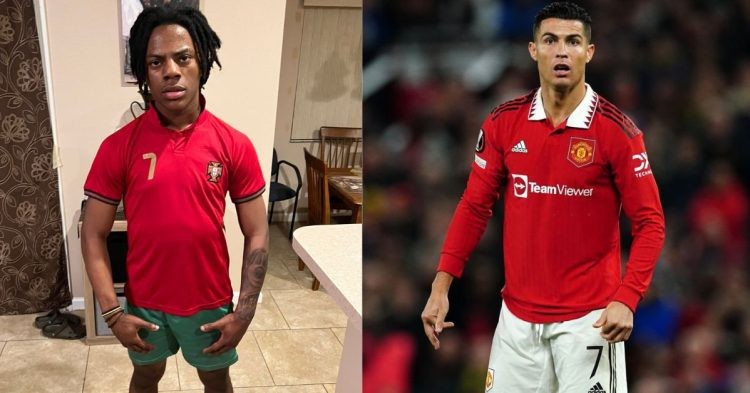 From Cincinnati, Ohio, in the United States, IShowSpeed is a well-known YouTuber, media personality, social media star, and businessman. He was born on January 21, 2005.

His extraordinary gaming skills and the movies he uploaded to his official YouTube channel have made him well-known across the country.

IShowSpeed really made a whole song for the World Cup pic.twitter.com/gjpOkh6kj4

He used to stream on Twitch as well, but he was banned from the site for flouting the rules of the user community. IShowSpeed also developed his own website to sell clothing. He has 5.2 million followers on his official Instagram account.

When Cristiano Ronaldo gave IShowSpeed a “shoutout” in the most recent Manchester United X Adidas ad, IShowSpeed lost his mind.

The YouTuber shouted his lungs out as the advertisement repeatedly named him.
On his second channel, Speedy Boykins, on November 6, 2022, Speedy published a video. “Ronaldo Shouted Me Out…” was the title of the video.

Speedy responded in the clip to a newly released commercial. The advertisement marked Adidas’ and Manchester United FC’s most recent joint venture.

A fan commented, “Nah! I think the sponsor or United intentionally made Ronaldo say speed.”

A second one added, “Speed is insane. Bro believes in anything.”

Another one added, “Boring act that brings tens of thousands of viewers to his lives and millions to his content.”

The last one concluded, “Say what you want. But I believe that the producers or whoever directed the video chose Ronaldo to say the word speed on purpose.”

Numerous conjectures were being made by the fans. Others poked fun at Ronaldo’s antics, even claiming that his statement about Speed was actually rehearsed. Nevertheless, other people felt a great sense of pride, believing that the entire response was really positive.

Speedy is an ardent Cristiano Ronaldo supporter. He has frequently stated that Ronaldo is his hero and that it was because of him that he decided to take up soccer. Speedy paid homage to his idol by creating a full-fledged music video called “Ronaldo.”

The YouTuber has written multiple music tracks based on his idol as if regularly watching FIFA wasn’t enough to demonstrate his devotion to the sport.

More than 24 million people have viewed his song “SEWEY” to honor Cristiano Ronaldo’s “SIUUU” celebration on YouTube, and they all praised him for his efforts.

Speed begins the introduction by praising all but two of the 32 nations that will take part in this year’s competition. He neglects to mention Spain and Denmark.

He concludes the verse by predicting how the World Cup will turn out. It’s difficult not to believe his guess is a touch skewed given the name of his previous song.

He gives some more detailed predictions on how Ronaldo’s Portugal team will win in the outro. It seems to be getting close to the end.

Few days remain till the FIFA World Cup 2022, and IShowSpeed has already stunned his community with his original World Cup anthem.