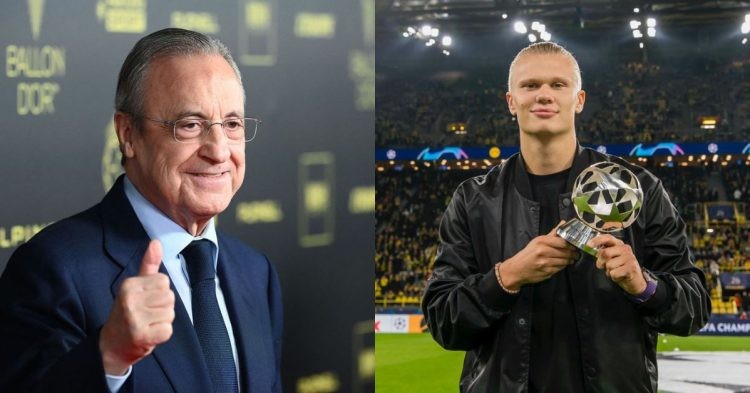 Ever since Erling Haaland arrived at Manchester City, there have been rumors of him moving away from England. There have been rumors of a release clause that can be activated only by a club outside of England. The Norwegian has always been linked with Real Madrid. Besides Haaland, Real Madrid has also been heavily linked to PSG star Kylian Mbappe.

Speaking to the media, Real Madrid‘s President Florentino Perez addressed the rumors of Haaland and Mbappe. He insisted there is no truth to either of the rumors and that the club already has the best players at their disposal.

Florentino Perez has become a controversial figure in football over his views on the European Super League. Being the face of the breakaway league, he has received a lot of heat. Not only from rivals but fans of his own club as well. Despite this, it is undeniable that he impeccably runs his club.

Florentino Pérez: “Release clause for Erling Haaland? I have no idea [on Haaland clause], honestly. We have the best players in the world at Real Madrid”. 🚨⚪️ #RealMadrid

“Mbappé rumours? Makes no sense to speak about it. We have Rodrygo and Vincius, they are two top players”. pic.twitter.com/zAMQZlhA86

Perez said, “Release clause for Haaland? I have no idea, honestly. We have the best players in the world at Real Madrid.” Rumors indicate that Erling Haaland has a £175m release clause. This can be activated only by non-English clubs and only beyond 2024. That is the same year Benzema’s contract runs out.

Haaland’s start to life at Manchester City has been phenomenal. He has already scored 20 goals in 13 matches across all competitions. His move to Real Madrid would be something that would truly break the transfer market.

When asked about the Kylian Mbappe rumors, Perez concluded, “Makes no sense to speak about it. We have Rodrygo and Vinicius, they are two top players.” Rodrygo and Vinicius have indeed been very impressive this season and last. While Vinicius has already scored seven in the season so far, Rodrygo has been a very useful option from the bench.

Kylian Mbappe was all set to join Real Madrid in the summer transfer window earlier this year. However, in a surprising turn of events, he signed a lucrative deal with PSG, keeping him there until 2025.

Real Madrid and many fans all over the world were angered by his decision to stay at a less competitive Ligue 1.

🚨 Kylian Mbappé will STAY at Paris Saint-Germain. He’s definitely not joining Real Madrid this summer, the final decision has been made and communicated to Florentino Perez. 🤝 #Mbappé

Kylian Mbappe is no doubt a very highly thought of player at every club in the world. Despite this, whenever there have been rumors linking him to a club, the owners or managers have been quick to deny them. This could be because of the way Mbappe has behaved himself at his current club.

While reports of him wanting to leave in January have been quashed, there are often new reports of rifts in the dressing room. These reports usually mention Kylian Mbappe and the other big two players at the club, Lionel Messi and Neymar.