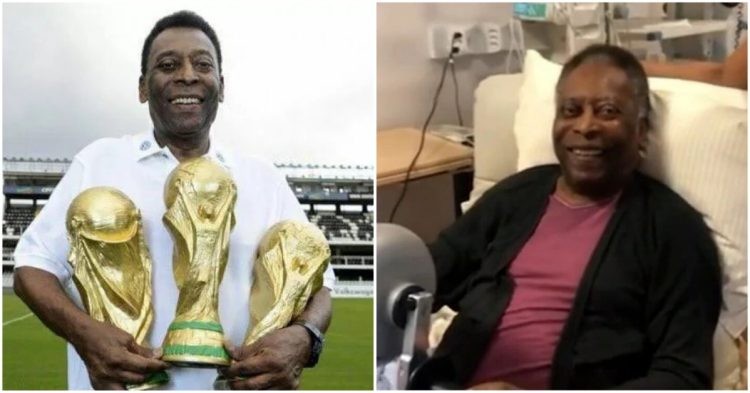 Pele is fighting for his life in the hospital. (Credit: Pele and Marca)

Brazilian soccer legend Pele was hospitalized earlier due to his ongoing battle with cancer. Pele is a 3-time World Cup winner for Brazil and he is in the conversation for being one of the greatest soccer players of all time. However, he is currently fighting for his life in a hospital bed.

Reports are stating that Pele’s condition has worsened significantly and he has been moved to end-of-life care. Apparently, he is not responding to the chemotherapy treatment anymore and his health has taken a turn for the worse. But not only that, but Pele is also dealing with some respiratory illness. It has prompted the doctors to stop the chemo and put him under end-of-life care.

Some may wonder what end-of-life care means for Pele. Currently, doctors are not treating Pele with chemotherapy. Instead, they are trying to fight the breathing issues that Pele is having. End-of-life care is reserved for patients who are severely ill and are considered to be on their death bed.

However, it comes as a shock to fans as earlier reports suggested that Pele was doing fine despite hospitalization. But, the situation does not look too good for the 82-year-old. After the news, French superstar Kylian Mbappe also tweeted and asked the fans to pray for Pele’s recovery.

What form of cancer does Pele have?

The news of Pele being irresponsive towards chemotherapy is certainly dishearting for Brazilian fans, who are rooting for their country in the ongoing FIFA World Cup 2022. But, Pele has been ill for quite some time now.

Pele’s real name is Edson Arantes do Nascimento. He underwent surgery to have a tumor removed from his colon. The procedure took place in December 2021. However, his cancer diagnosis came in August of that year.

The Brazilian was born on October 23, 1940, in the Minas Gerais region of the country. The forward has scored 77 goals for his national side. But, in total, the Guinness Book of World Records has credited him with 1,279 career goals!

He lifted the world cup in 1958, 1962, and 1970. Pele played his club soccer for the Brazilian side Santos and for the American soccer team, New York Cosmos. He did not have much of a presence in European soccer, but that did not stop him from winning the FIFA Player of the Century trophy alongside Argentine legend Diego Maradona in 2000.